Syria slams Arab League for giving seat to a “monstrosity” 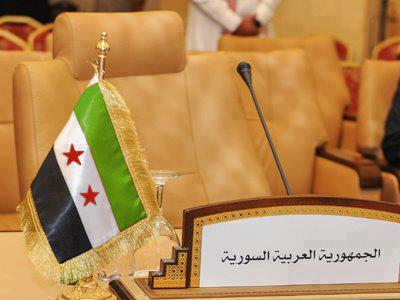 Officials from President Bashar Assad’s regime slammed the Arab League’s decision to invite the Syrian opposition to represent Syria at the summit in Doha on Tuesday.

He indicated that the practices of the Arab League regarding the crisis in Syria since its beginning haven’t been related to its charter or its internal system or the principles of the joint Arab work as well as the interests of the national security.

Syria’s membership was suspended in November 2011.

Speaking at the opening session Foreign Minister Davutoğlu pointed out that the Summit marks the beginning of a new chapter in the quest of a free, democratic and prosperous Syria.

“It represents a historic milestone as the legitimate representatives of the Syrian people today have rightfully taken the seat of their country in the Arab League”, he added.

Meanwhile, Syrian National Coalition leader Khatib in addressing the summit in Doha said that he had asked US Secretary of State John Kerry to provide Patriot missile protection that covers northern Syria, and that Kerry had “promised to look into the matter.”

“I think that a Patriot missile battery would follow the definition of military assistance,” Carney said, adding that Patriot anti-missile batteries in Turkey were for self-defense only.

Even though al-Kahtib resigned from the coalition due to lack of support from the international community for help in ending the nation’s bloody conflict the Coalition hasn’t accepted his resignation.

NATO’s  involvement in Syria’s war until now has been to position Patriot missile batteries along the Turkish border in order to prevent any  missile launches from the Syrian side. their purpose is solely for self defense.