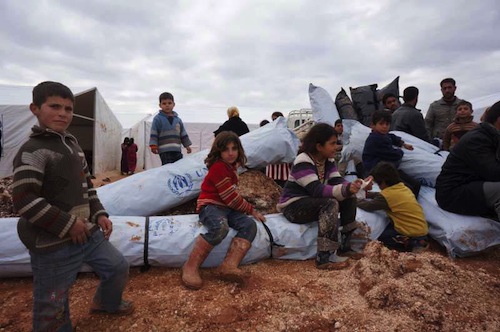 The United Nations refugee agency said it has delivered aid for thousands of people in an embattled suburb of Homs, Syria, who have been affected by recent fighting

On Saturday, blankets, mattresses and household items supplied by the UN High Commissioner for Refugees (UNHCR) were distributed to 200 families displaced from the suburb of Al Wa’er to Homs. Yesterday, a UNHCR truck carrying relief items for 10,000 people arrived in Al Wa’er itself.

UNHCR spokesperson Adrian Edwards told reporters in Geneva that Al Wa’er is home to an estimated 400,000 people, half of whom have been displaced from other areas of Homs governorate – mainly Baba Amer and the old city of Homs.

“Heavy clashes between Government and opposition forces in Al Wa’er broke out on May 16th and were interrupted by a two-day lull that started on Saturday,” he stated. “Conflict has since resumed. In the course of the recent fighting, at least five buildings hosting hundreds of internally displaced persons (IDPs) have been seriously damaged.”

Edwards said that in one, Alarabaeen Tower, seven members of a single family were killed during mortar attacks. At least seven other people were killed in separate incidents, and UNHCR knows of 32 people having been injured.

The fighting has displaced around 5,000 people, with 250 families having fled to other parts of the city of Homs, where they are staying with relatives. Many of these people have been displaced multiple times. Other displaced people crossed into Lebanon last week.

In addition to trying to deliver additional humanitarian relief to the affected population in and around Al Wa’er, UNHCR is also prepositioning relief items in other areas of Homs itself as a contingency measure for the area.

“UNHCR once again calls on all parties to safeguard the safety and security of the civilian population affected by the conflict. We also reiterate our call for all parties to the conflict to guarantee unhindered access for all humanitarian actors, UNHCR included,” said Edwards.

UNHCR continues to be concerned about reported impediments in the way of people seeking to cross borders as refugees. Andrew Harper, the UN representative in Jordan, reported today that some 230 refugees had arrived at Za’atari camp on Monday, with similar numbers at the weekend.

However, crossings are still significantly down from the levels of two weeks ago, according to the agency, which added that recent problems with border crossings have also been reported along the Syria-Iraq border.

Edwards stressed that it remains essential that civilians seeking to flee insecurity, whether they are IDPs or refugees, have safe passage to areas that are outside of harm’s way.

Citing the escalating bloodshed and suffering in Syria, the UN High Commissioner for Human Rights, Navi Pillay, yesterday urged the international community to put an end to what has become “an intolerable affront to the human conscience.”

Addressing the 23rd session of the Human Rights Council in Geneva, Ms. Pillay emphasized that countries cannot continue to ignore the plea of civilians who are in dire need of protection and assistance.

The Council is scheduled to discuss the situation in Syria tomorrow and consider a related draft resolution.