Posted on: August 23rd, 2013 by AlYunaniya Staff No Comments 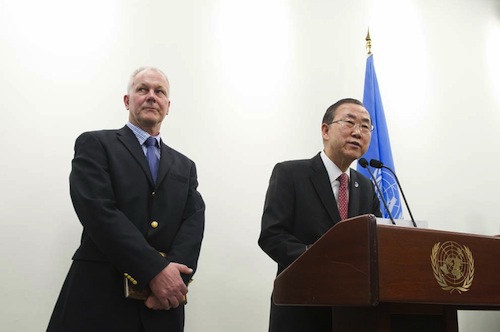 Secretary-General Ban Ki-moon is asking the Syrian Government to allow a team of United Nations experts to investigate the latest allegations regarding the use of chemical weapons and is sending one of his senior officials to Damascus in this regard.

“The Secretary-General believes that the incidents reported need to be investigated without delay,” Ban’s spokesperson told journalists in New York, adding that the UN chief remains deeply troubled about the alleged use of chemical weapons in Syria.

Ban is requesting that the team, led by Swedish scientist Åke Sellström, be granted permission and access to “swiftly” investigate the incident which occurred on the morning of 21 August 2013.

“A formal request is being sent by the United Nations to the Government of Syria,” the spokesperson added. “He expects to receive a positive response without delay.”

Ban has instructed the High Representative for Disarmament Affairs, Angela Kane, to travel to Damascus. Before the Government allowed access to the UN team, Ms. Kane consulted with Damascus on the modalities essential for cooperation to ensure the proper, safe and efficient conduct of the mission.

Meanwhile, UN High Commissioner for Human Rights Navi Pillay today also urged the Government and opposition forces to enable the team to examine the site of the alleged attack “as a matter of utmost urgency.”

She called the allegations “exceptionally grave” and said the reported killing of hundreds of civilians, including many women and children, to be comprehensively proven or disproven “as soon as is humanly possible”.

Also Special Advisers on the Prevention of Genocide, Adama Dieng, and on the Responsibility to Protect, Jennifer Welsh, added their voices to the growing list of senior UN officials condemning the alleged use of chemical weapons urging access “now.”

“We call on the relevant actors in Syria to act responsibly in the face of these extremely serious allegations, and to grant and ensure immediate access for the United Nations to investigate the circumstances of the alleged attacks with chemical weapons in Damascus,” Dieng and Welsh said in a statement.

“The alleged use of chemical weapons in Syria is yet another example of the crimes taking place in the country. All these crimes must be investigated immediately, and those responsible for committing them held to account, as an integral part of a peaceful and sustainable political solution to the disastrous conflict in Syria.”

Deputy Secretary-General Jan Eliasson briefed the Security Council  in a closed-door session about the latest allegations. He stressed that they should be seen in the larger and broader perspective of the great need to end hostilities in the country through political means.

Following the meeting, Maria Cristina Perceval of Argentina, President of the Security Council during the month of August, said the 15-member council had “strong concern among the Council members” about the allegations, and a general sense that there must be clarity on what happened and that the situation has to be followed carefully.

Both he and Pillay reiterated their calls for a halt to the shelling and fighting so that humanitarian assistance can be urgently delivered.