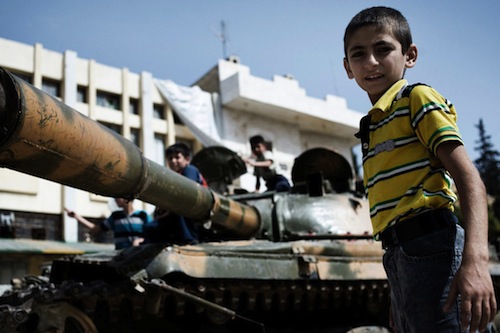 The United Nations Children’s Fund (UNICEF) and its partners yesterday delivered life-saving supplies to assist thousands of children in the city of Aleppo, one of the areas most affected by the Syrian conflict.

“The humanitarian situation in Aleppo is desperate,” said UNICEF Deputy Executive Director Yoka Brandt, who visited the Syrian capital, Damascus, last week. “Our goal is to reach children who most need our assistance, no matter where they are.”

UNICEF also delivered five generators and eight water tanks that will provide safe drinking water to more than 1 million people in Aleppo. The installation of these generators has already begun, the agency said in a news release.

Aleppo, which has been difficult to access due to insecurity and fighting, has the highest number of affected people in the country – at least 2.4 million people. According to UNICEF, half of these are children.

“Humanitarian needs, especially for food, water and shelter, are very severe,” said Ahmedou Bahah, who accompanied the convoy as head of UNICEF’s Water, Sanitation and Hygiene programme in Syria.

According to UNICEF, living conditions, especially in the worst affected areas, have become deplorable. Prices have tripled or quadrupled, and families are struggling to provide their children with basic supplies including bread, vegetables and fruits, milk, yogurt and eggs.

Since the beginning of the year, UNICEF has participated in 20 UN convoys, 15 of which were to areas controlled by opposition groups. Through these and other missions, UNICEF and its partners have provided 10 million people with access to safe drinking water, vaccinated 1.5 million children, enrolled more than 300,000 children in schools and supported more than 450 school clubs where children receive the support needed to overcome some of the horrors they have witnessed.

Since fighting began in March 2011 between the Syrian Government and opposition groups seeking to oust President Bashar Al-Assad as many as 100,000 people have been killed, almost 2 million have fled to neighbouring countries and a further 4 million have been internally displaced. In addition, at least 6.8 million Syrian require urgent humanitarian assistance.