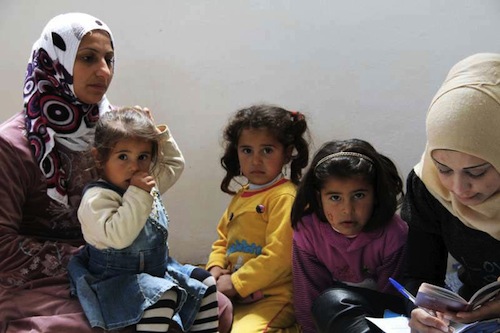 Efforts to rehabilitate Syrian schools ahead of the academic year are underway despite the ongoing violence across the country, the United Nations Children’s Fund (UNICEF) announced yesterday.

Addressing a media briefing in Geneva, a UNICEF spokesperson, Marixie Mercado, reported that according to Syrian Government estimates some 2,072 schools – out of 22,000 across the country – have been damaged or destroyed, and over 600 are occupied by displaced persons.

She also noted that UNICEF had completed repairs in 64 schools in Deraa, Rural Damascus and Lattakia, while another 100 schools would be rehabilitated within the coming days and weeks.

The Syrian Government was also moving internally displaced persons (IDPs) out of some schools and into alternative sites, such as unused public buildings, in order to prepare for the school year which is set to commence on 16 September, Ms. Mercado said, adding that it was “extremely important” that children returned to school as a way of providing stability and respite from the conflict.

More than 18,000 people, mostly civilians, have died since the uprising against President Bashar al-Assad began some 18 months ago. Amidst reports of an escalation in violence in recent weeks in many towns and villages, as well as the country’s two biggest cities, Damascus and Aleppo, UN agencies now estimate that some 2.5 million Syrians are in urgent need of humanitarian assistance.

Syria’s neighbouring countries have also been affected by the crisis, as hundreds of thousands of refugees have spilled over the borders and into refugee camps in Jordan, Lebanon, and Turkey.

Pointing to the situation in Jordan’s Za’atari refugee camp, where half of the estimated 28,000 refugees are children, Ms. Mercado said that UNICEF was busy registering those of school age while working to build an educational facility that could accommodate up to 5,000 pupils. In the interim, she continued, students were being taught in temporary learning spaces, including tents, as the school year in Jordan had already begun last week.

In Lebanon, schools will accept an estimated 32,000 Syrian refugee children in the country’s public school system when classes begin on 24 September, though absorption capacity remains a concern. UNICEF will be providing those children with education kits, remedial education, recreational and psychosocial activities. At the same time, the UN agency was undertaking the construction of 10 temporary schools in the country’s Al Qaim refugee camp where 1,250 children are already being sheltered.

Against that backdrop, a spokesperson for the new Joint Special Representative of the United Nations and the League of Arab States on the Syrian crisis, Lakhdar Brahimi, confirmed today that the UN-Arab League official met separately in the Syrian capital of Damascus with the Ambassador of Russia and the Charge d’Affaires of China, while Brahimi met with the Iranian Ambassador on Thursday. The spokesperson further noted that Brahimi was scheduled to meet with Syria’s President Bashar al-Assad on Saturday morning.