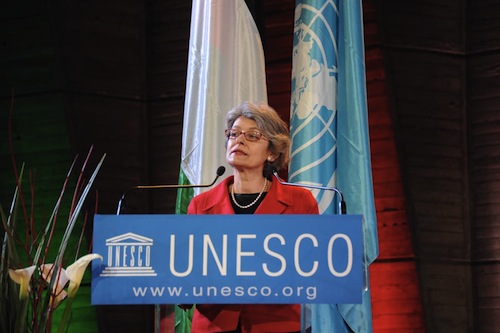 The head of the United Nations agency tasked with defending press freedom yesterday called for Syrian authorities to probe the recent deaths of five citizen journalists killed during shelling, and to take steps to ensure the safety of media workers in the country.

“I call on the Syrian authorities to fully investigate the circumstances of their deaths,” the Director-General of the UN Educational, Scientific and Cultural Organization (UNESCO), Irina Bokova, said in a news release, in which she also condemned the killings, adding that the five lost their lives while trying to inform the Syrian people of the tragic events taking place in their country.

The deaths in late May of Ammar Mohamed Zado, Ahmed Adnan Al-Ashlaq, Lawrence Fahmy Al-Naimi – all of whom worked for the Shaam News Network – and Bassel Al Shahade and Ahmed Al Assam, bring to 11 the number of citizen journalists killed in Syria since February.

They are among the more than 10,000 people, mostly civilians, who have been killed in Syria since the uprising against President Bashar al-Assad began some 16 months ago.

“I also call on all parties involved in the present conflict to take all necessary steps to improve safety for all media workers in Syria, who are not only defending the right of the Syrian people to information and press freedom, but are also exercising their own right to freedom of expression, which is vital for all societies,” Ms. Bokova added.

According to the Committee to Protect Journalists, a non-governmental organization, Ammar Mohamed Zado, Ahmed Adnan Al-Ashlaq and Lawrence Fahmy Al-Naimi were killed in the capital, Damascus, on 27 May, when the apartment they were staying in was shelled.

The organization added that Bassel Al Shahade, who was working on a documentary film, and cameraman Ahmed Al Assam were killed on 28 May while filming an assault by armed forces in the Safsafa district of Homs.