Syrian crisis depriving hundreds of thousands of children of education 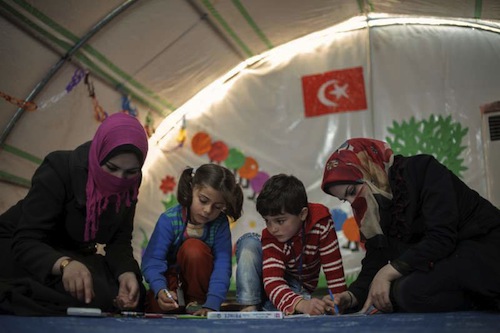 The escalating violence in Syria is threatening the education of hundreds of thousands of children, the United Nations Children’s Fund (UNICEF) said today, following an assessment which shows a significant number of schools have been destroyed, teachers have been killed, and attendance rates have plummeted.

“The education system in Syria is reeling from the impact of violence,” said UNICEF’s Syria Representative, Youssouf Abdel-Jelil. “Syria once prided itself on the quality of its schools. Now it’s seeing the gains it made over the years rapidly reversed.”

According to the assessment, one-fifth of the country’s schools have suffered direct physical damage or are being used to shelter internally displaced persons (IDPs).

In cities where the conflict is most intense, such as Idlib, Aleppo and Deraa, children often fail to turn up for class, sometimes attending only twice a week. In areas with high numbers of IDPs however, classes are overcrowded, sometimes hosting up to 100 students.

The assessment, conducted in December, also found that more than 110 teachers and other staff have been killed and many others are no longer reporting for work. In Idlib, teacher attendance is no more than 55 per cent.

Some schools have also been used by armed forces and groups involved in the conflict, making parents reluctant to send their children to school.

“Being in school makes children feel safe and protected and leaves parents hopeful about their children’s future,” said Mr. Abdel-Jelil. “That’s why so many parents we talk to single out education as their top priority.”

The agency is also providing teaching and learning supplies and is rehabilitating damaged schools, but it requires an additional $1 million to keep the clubs open until the end of May.

Funding shortfalls are also preventing the provision of urgently-needed pre-fabricated classrooms, repairs and rehabilitation of learning spaces, and the provision of teaching and learning materials. Overall, UNICEF needs $20 million for its education programmes in Syria during the first six months of the current year, of which it has received no more than $3 million.

Lack of funding for humanitarian activities remains a major constraint. The UN Office for the Coordination of Humanitarian Affairs (OCHA) today said that of the $519 million requested to respond to the crisis in Syria, only 21 per cent has been received and the $1 billion Refugee Response Plan is 19 per cent funded.