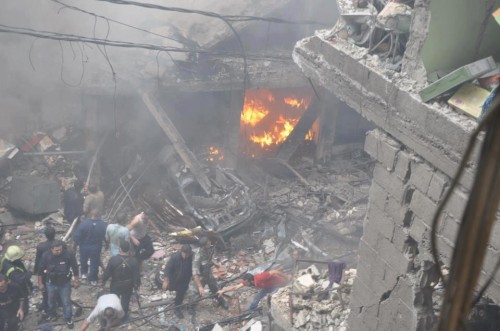 Syrian warplanes pounded the Palestinian Yarmouk camp in Damascus on Sunday killing at least 25 people in an area where Syrian rebels have been trying to advance on the capital, according to opposition activists.

The deaths resulted from a rocket hitting a mosque in the camp, where refugees had been sheltering from other fighting in nearby suburbs of Damascus, Reuters reported citing activists.

The incident was the first reported aerial attack on the camp since the revolt against President Bashar Assad erupted in 2011.

Yarmouk was established in 1957. It occupies an area of 2.1 square kilometers to accommodate refugees who were scattering in mosques, schools and other public places.

Many of the refugees in Yarmouk are professional, working as doctors, engineers and civil servants. Others are employed as casual laborers and street vendors. Overall, living conditions in Yarmouk are far better than those of the other Palestine refugee camps in Syria.

Heavy fighting in the camp broke out 12 days ago between Palestinians loyal to Assad and Syrian rebels. The fighting intensified on Saturday with rebels gaining ground inside the camp, forcing Ahmed Jibril, a veteran leader of a Damascus-based Palestinian faction that back Assad to leave the capital with his son, according to Maan News.

According to reports, Ahmed Jibril and his son have left Yarmouk, located in the Taqaddum neighborhood in southern Damascus, for the country’s Mediterranean city of Tartous.

Jibril’s PFLP-GC has maintained strong ties to Assad throughout the uprising, unlike Hamas whose Damascus-based officials quietly pulled out of Syria a few months ago.

In a related development, Alaeddin al-Sabbagh, former head of public relations in the Syrian intelligence, has announced his defection.

He made the announcement while speaking to Al Jazeera on Sunday. He called Assad’s regime a “clinically dead” one.