Posted on: June 10th, 2012 by AlYunaniya Staff No Comments

Syrian National Council elects a Kurd as its new leader 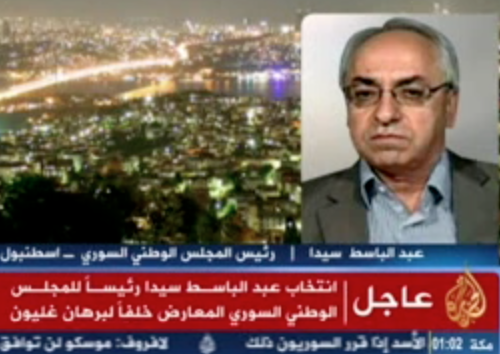 The opposition Syrian National Council (SNC) announced on Sunday that it had elected Kurdish activist Abdel Basset Sayda as its new leader at a meeting in Istanbul.

He takes over from Paris-based academic Ghalioun, an exile living in Paris, who stepped down last month over mounting criticism for having had his presidency constantly renewed when the council was supposed to represent a democratic alternative to the rule of President Bashar al-Assad, Al Jazeera reported. Burhan Ghalioun,  had been president of the council since it was formed in August of last year.

SNC’s new president Sayda is another of those exiled academics, a philosophy professor who lived outside the country for some 18 years, more than a decade in Sweden.  Born in 1956 in Amuda, a mostly Kurdish city in northeastern Syria, Sayda is an expert in ancient civilizations and author of a number of books on Syria’s Kurdish minority but is Arabic educated, according to Reuters.

The SNC has been repeatedly condemned for not representing the full diversity of Arabs, Kurds, Christians, Alawites, Sunni Muslims and other ethnic and religious groups in Syria.

A dozen Kurdish political groups are banned by Syrian authorities.

Opposition sources said the election of Sayda could help attract more Kurds, who number one million out of Syria’s 21 million population.

Demonstrations against Assad’s rule might have taken place in Kurdish regions of Syria but not as intense as protests in the rest of the country.