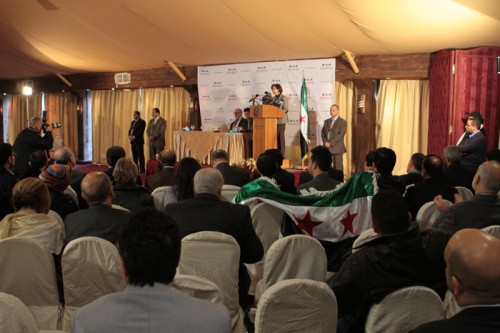 Syrian opposition leaders met in Turkey on Friday in a attempt to map out their differences and form a united front to tackle the escalating 15-month civil conflict that has erupted in the country.

The two-day Istanbul meeting includes almost all opposition factions, while representatives from several Arab and Western countries were present as observers, along with a representative of international Syria envoy Kofi Annan, according to Al Jazeera.

The SNC has been widely criticized for not representing the full diversity of minority groups in Syria.

Last Sunday, the SNC appointed Kurdish activist Abdel Basset Sayda as its new leader after said Burhan Ghalioun, who stepped down last month as head of the main opposition group the Syrian National Council, amid mounting criticism having his presidency constantly renewed. Ghalioun had also been accused of ignoring the Local Coordination Committees, which spearhead anti-government protests on the ground in Syria, and of giving the Muslim Brotherhood too big a role.

Kurdish leader Sayda has pledged to embrace all groups to win a broader appeal.

“Our first aim is to create reform inside the [council] and reconstruct our structure [while] continuing our relations with the other groups in the opposition,” the council’s new leader, Kurdish activist Abdel Basset Sayda, told the Hurriyet Daily News in an interview on June 15, adding that all groups that wished to join the council would be welcomed.

Friday’s only major absentee was the National Coordination Committee for Democratic Change, a large group of Arabs, Kurds and socialists, who said “technical problems” prevented them from attending, other participants said, according to Hurriyet news.

The meeting comes ahead of a planned major conference organized by opposition groups in Cairo under the auspices of the Arab League, although no date for that meeting has yet been announced.

In Turkey where the group is meeting, the number of registered Syrian refugees has topped 30,000, a Turkish foreign ministry official said on Friday, according to Al Arabiya.

UN officials have said Syria has now entered in a full-scale civil war, with activists saying more than 14,400 people have been killed since the uprising erupted in Mid-March 2011.