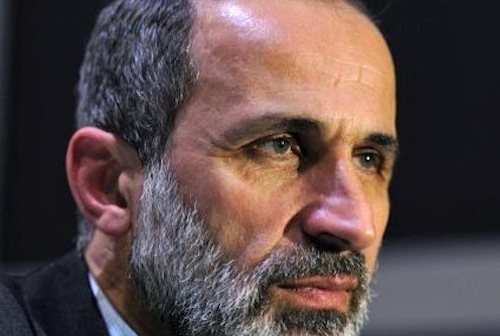 The Syrian National Coalition has refused the resignation of its president Moaz al-Khatib, the opposition bloc said in a statement released hours after he announced he was leaving.

“I had promised the great people of this nation (Syria), and I promised God that I will resign if things reached some red lines, and I will keep my promise today and announce my resignation from the National Coalition; so that I can work with freedom that is not available inside the official institutions,” Moaz al Khatib said in a statement on facebook.

He did not explain what had prompted his resignation.

“Our message to everyone is that the solution to the Syrian crisis will be taken by the Syrians, and the Syrians alone,” he added.

Neither the Coalition’s presidential office nor its general assembly has accepted Khatib’s resignation, AFP reported.

The surprise resignation comes just days after the first election in Istanbul of a rebel prime minister, Ghassan Hitto, and just over two years on from the outbreak of a popular revolt against President Bashar al-Assad.

“For the past two years, we have been slaughtered by an unprecedentedly brutal regime, while the world has looked on,” Khatib said.

Hito, chosen from 12 candidates, is the second Kurdish opponent who took a senior official position in Syrian opposition after Abdulbasid Seyda.

Until last year, Hitto was a senior IT executive at a technology communications company in Texas.

Hitto’s election follows two failed attempts to form interim governments due to a lack of consensus between the opposition.

Meanwhile, leaders of Syria’s main opposition group will attend an Arab League summit this week, the Qatari prime minister said on Sunday, according to AP.

The Arab League has suspended Assad’s membership and recognized the Syrian National Coalition (SNC) as the legitimate representative of the people of Syria.