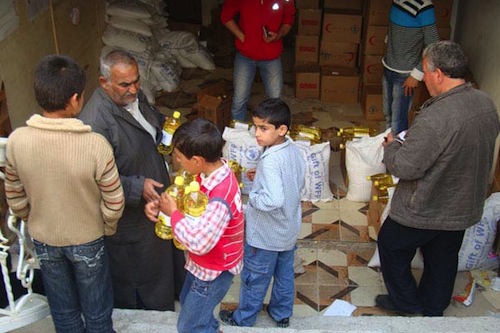 Deteriorating living conditions have forced some Syrians to beg or, to save money, eat the same food for every meal, the United Nations emergency food assistance agency said, following interviews with families in various parts of the war-riven country.

The number of people begging rose to nine per cent in April, up from five per cent in March, according to the people interviewed, Ms. Byrs said, adding that for them, it was “their only option.”

Since it began in March 2011, the Syrian conflict has left more than 93,000 people dead and another 6.8 million in need of humanitarian assistance.

Housing is of particular concern for families in Rural Damascus, Damascus and Tartous. Forty-two per cent of those interviewed said they need help paying rent. Two or more families live together to share rental expenses, with up to 25 people living in a single two-room apartment, according to the UN agency’s monitoring reports.

In those areas, along with Aleppo, children of displaced families are not attending schools and some are forced to work to help their families make ends meet, Ms. Byrs said.

Meanwhile, WFP is preparing for the start of the Islamic fasting month of Ramadan during the second week of July. The UN agency said it is in the process of increasing its food transports for prepositioning into Syria since organisations assisting with the transport will limit their activities.

WFP said it plans to reach 2.5 million Syrians in June and July, after providing food assistance to almost 2.2 million at 200 locations in all parts of Syria in April.