Tetanus eliminated in over 30 countries at high risk 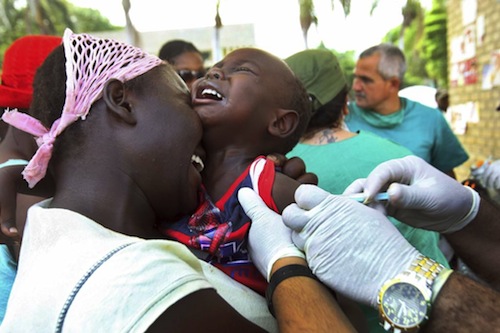 The United Nations and its partners announced that tetanus – one of the most deadly diseases a mother and her newborn can face – has been eliminated in more than 30 countries with previously had high rates of the illness.

The broad based Maternal and Neonatal Tetanus Elimination Initiative, in which various United Nations agencies participate, said that since 1999, over 118 million women of child-bearing age have been vaccinated against tetanus in 52 countries.

Many of these women received their tetanus vaccine as part of a campaign which included other life- saving interventions for children – such as immunization against measles, Vitamin A supplements, de-worming tablets and information on umbilical cord care.

Tetanus kills one newborn baby every nine minutes and almost all of these babies are born in poor families living in the most disadvantaged areas and communities. The disease is transmitted when children are born in unhygienic conditions, and non-sterile materials are used to cut the umbilical cord, or are applied to the umbilical bump. At that point, the mother’s life is also in danger.

Tetanus is easily preventable with a vaccine administered to the mother. With at least three protective doses that cost about $2, the mother and her future newborns are protected for five years.

In a news release, the Initiative said that despite the progress half the 59 priority countries, some 28 other have still not reached the elimination goal. The main challenges to eliminate the disease are a lack of access to communities because of insecurity, cultural barriers, competing priorities, and inadequate funding.

Shortly after the Initiative was launched in 1999, it was estimated that over 200,000 deaths of newborns were caused by tetanus every year. By 2010, this number dropped to an estimate 58,000.

The Initiative is an international private-public partnership that includes national governments, the UN Children’s Fund (UNICEF), World Health Organization (WHO), UN Population Fund (UNFPA), the GAVI Alliance, USAID/Immunization Basics, Centres for Disease Control and Prevention, Save the Children, and the Bill & Melinda Gates Foundation, among others.