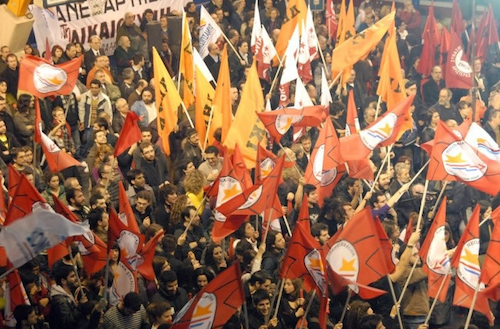 When the political situation in Greece comes to mind, it automatically ties up with the quote “in desperate times, drastic actions are needed.” Irony has it that in the country were democracy was first initiated, democracy has been demolished. But what is in the mind of every Greek is that for one civilization to prevail, another must crumble to dust, even if that leads to severe inner problems and destruction. Following one election, and another one around the corner, Greece has plunged itself into a political blunder of the first kind. This is a mistake that despite the country’s Geo-strategic location, natural resources, and income from tourism, Greece will not be able to escape from, due to the ineffectiveness of our current self-condemned politicians.

Primarily, the left in this small Balkan country ranges from center-left PASOK, to socialist SYRIZA, to the “Democratic” left, and our very own Communist Party of Greece, KKE. It is tragic to fathom that this once great and powerful empire is on the verge of annihilation. Like all other Left Parties in every self-respecting country, the Left in Greece has been unable to unite and meet the demands of the people. PASOK, following a pro-IMF policy has virtually lost all proletariat support, as for it, to run the government would mean further starvation, further indigence and poverty, as well as greater desperation. SYRIZA, which has gained second place in the elections, follows a pro-Nasser policy. That would mean nationalizing banks and industry. As this historically has always intimidated the population, following such a policy has casted severe doubts upon its validity and reliability as a party. The Communist Party has no clear-cut policy, but wants a worker’s revolution similar to the brave struggle of the workers at the Halivourgeio.

All this controversy of policies has led to the eradication of all traditionally Left wing Greeks. Witnessing the war that has began in the name of leadership; none of the above parties are willing to co-operate in order to overcome this blunder and perhaps the crisis itself. On the contrary, it has led to the rise of the Right and the one Fuhrer prinzip Nationalist Socialist party in Greece. The right, for perhaps the first time in history is dispersed. Political opposition from within the primary right wing party ND occurred mainly in opposition of the unfathomable, intolerant pro-German and IMF policies. Mr. Kammenos has turned his back against Mr. Samaras. What is notable is the history in process as Mr. Kammenos, a right wing politician is willing to corroborate with Mr. Tsipras, the leading left wing party leader.

As a matter of fact, this economic warfare that is being witnessed in Greece is one of a myriad. It insinuates a modern day slavery situation. The truth is that Greece can fight back, and merge victorious as a new nation from this war. The economic problems do not need a Mr. Keynes to be solved. On the contrary a daring politician with infinite courage could lead Greece out of this indigence. How? With simple solutions that have been drowned by the media in the name of pro-IMF, pro-PASOK, and pro-ND policies.

A couple of years ago, Qatar appeared willing to invest in Greece’s old airport, the Helleniko to construct a huge park, luxurious hotel and a casino. Gambling is a very dangerous game, but the mass of wealthy tourists that would come to Greece in order to gamble would be uncountable. To add salt to the injury, not only would Greece’s prestige rise, but the taxation of such an investment would increase the natural income of Greece. Instead PASOK, declined such an investment. They stated that the notorious situation in Greece would only be worsened by such an investment, and the Qatar investors were left to deal with all the everlasting bureaucracy of the Greek public sector.

Moreover, when Mr. C. Karamanlis fell from office, so did his policies. Do not get me wrong, my views are anything but right wing. However it is my duty to acknowledge politics that are best for my people. Under Mr. Karamanlis, Russia had offered to pay off the debt, in return to an economic deal that would profit both Russian and Greeks, not to mention that it would improve Russo-Greek relationships. As PASOK gained power the Burgas-Alexandrople gas transportation plans, and the idea that Russia would pay off the debt was drowned off to German and American interests. Perhaps a good politician, one who cares about his country and his people would righteously give air back to this idea.

Lately we have come to the knowledge that Greece has natural gas. Understandably, this would increase tensions with Turkey. In a more diplomatically complicated option, instead of waging war, perhaps it would be time for a diplomatic coup, where Greece and Turkey, could together invest and perhaps dominate the sales of natural resources globally.

In my belief these are the greatest weapons against destruction.

Alex Shaltout is an International Relations and Human Rights Student.