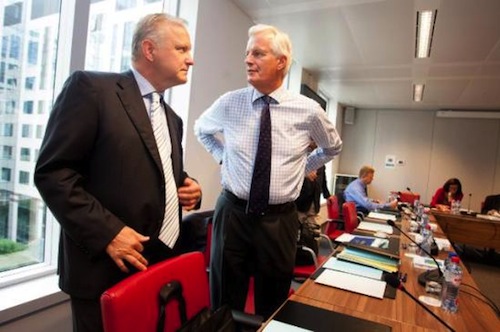 Olli Rehn, Vice-President of the EU Commission responsible for the economy and euro and Yves Mersch, member of the executive board of the European Central Bank both delivered speeches yesterday in the European Forum Alpbach 2013, set in the breathtaking Alpine landscape. A very convenient excuse for an escape to Tirol. The European Forum Alpbach is a non-profit association based in Vienna, Austria. Its main event is this self-titled interdisciplinary international conference which takes place in Alpbach, Austria, every summer. This year’s forum was entitled “Experiences and Values”. The two European dignitaries were supposed to speak about their experience on the still ongoing economic crisis and the values upon which Europe will base its cures. Let’s see if they fulfilled their task.

Rehn said “To beat the crisis, we have taken action to deal with short, medium and long-term challenges. For the short-term, we had to stabilise financial markets so as to avoid the free fall of our economy. For the medium term, we need economic reforms for sustainable growth and job creation. And for the long-term, we needed to redesign the architecture of European Monetary Union”.

Mersch, as a central banker had to concentrate on the capital market. He stressed that “Governments have recognised that certain powers need to be at the European level for a Single Market to function. But what we have seen in the crisis is that we do not yet have the right powers at the European level to support a Single Market in capital…We see Banking Union, therefore, not only as a necessary complement of monetary union but also as a way of putting in place the necessary institutions, rules and instruments to sustain a genuinely single financial market”.

Let’s see if they are telling the truth. No doubt they are absolutely right that the EU is still fighting the repercussions of the crisis and tries to fill the institutional holes in the EU’s edifice. Speaking about the crisis the two top EU officials should have said a few words about its causes. None of them however mentioned that the German and the French banks kept lending money to Greece until the spring of 2009 that is almost two years after the first sings of the crisis were quite visible and the ECB had already sounded the alarm, even from September of 2007.

The Greek minister of Finance at the time Yiannis Papathanassiou had boast in March of 2009 for his high performance as a borrower. He stated that the Greek exchequer ‘under his guidance’ had borrowed in the first two months of that year €50 billion. This kind of money was of the order that could make or break Greece and as everybody learned some months later the poor country ended up totally broke.

Of course the Greek government wasted the €50bn as they had done with previous loans. Their ‘policy’ was to use the loans to appoint thousands of their political clientele in the public sector. The money was also misappropriated by corrupt politicians. Akis Tsohatzopoulos, the No2 in all Costas Simites governments from 1996 to 2004, is on trial today for money laundering and for taking bribes. From 2004 until 2009 the two Costas Karamanlis governments hired 850,000 more people in the public sector, as Leonidas Grigorakos, the deputy minister of Interior revealed yesterday in Athens.

However the Greek and the other mindless EU governments didn’t do it alone during the party years of the first decade of the new Millennium. All the major EU banks kept lending them hundreds of billions of euro without a second thought. Greece was borrowing at the same interest rate as Germany. No worries if those loans were ever to be repaid. It was enough to write the loans as ‘assets’ in the bank’s balance sheet, thus fattening the bonus of the banker at the end of the year. The bonuses to bankers for approving that kind of lending were so huge, in the area of millions annually, that one year’s take home pay was enough to support a family for a lifetime. Consequently the lenders are equally responsible as the fraudulent and mindless Greek politicians now in the hands of the penal justice. Unfortunately no banker has been put behind bars.

It’s deplorable that a Commission Vice President and a Member of the Executive Board of the ECB didn’t make the slightest reference to such actions of bankers and politicians which caused the worst economic crisis of Europe after the WW II. Not even a word about how dearly the average European pays for the ‘party’ held for years by a handful of people. Both speakers enjoyed the trip and the stay in the Alpine landscape of Alpbach and recited once more the recipe for Eurozone to come out from the crisis, at a dear cost paid by the many.

In short Rehn and Mersch didn’t say a word on their experience from the crisis nor on what caused it neither how much the average European pays for it.

Republished by permission from Europeansting.com.