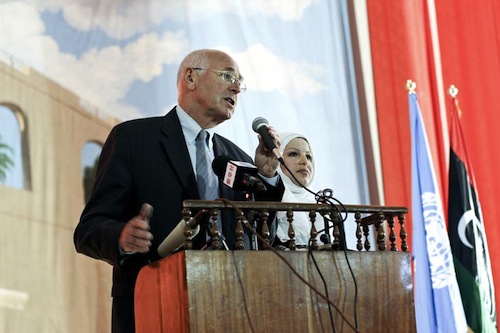 The top United Nations envoy for Libya has welcomed the announcement by the country’s electoral body that the legislative elections will be held on 7 July, noting that this will enable preparations to be completed in time for the polls.

“This is an important step in Libya’s road to recovery and democracy. It sets in motion the final stages of a historic process for Libyans to freely choose their own representatives for the first time in over four decades,” said the Secretary-General’s Special Representative and head of the UN Support Mission in Libya (UNSMIL), Ian Martin.

“The date announced by the Commission will enable essential preparations to be completed prior to voting,” he added in a statement, welcoming the announcement of the new date by the High National Election Commission.

Some 2.7 million people in the North African nation have registered to vote for members of a new National Congress, which will be tasked with drafting a new constitution for Libya.

The polls, which were originally slated to be held in late June, will be the first free elections in decades in Libya, where Muammar al-Qadhafi ruled for more than 40 years until a pro-democracy uprising last year led to civil war and the deposing of his regime.

“What has been achieved so far is admirable, especially in the context of an extremely tight timetable and major operational challenges,” Mr. Martin said in the UNSMIL statement. “I am confident of the commitment of the Election Commission and all authorities to see an early and successful conclusion of this electoral process.”

The envoy has previously stated that the upcoming polls are just one part of a process that requires addressing key issues in the country’s transition such as ensuring public security, promoting human rights, tackling arms proliferation and ensuring border security.