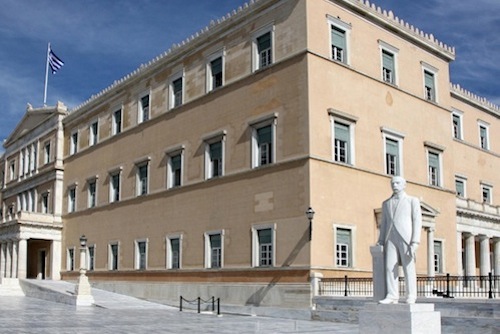 Government sources suggested there has been progress in the talks with troika representatives yesterday, with talks to continue noon today.

A new meeting between Finance Minister Yannis Stournaras and Administrative Reform minister Antonis Manitakis with troika representatives is expected to clarify further the pending issue of the dismissals of around 2,000 law-breaking civil servants.

According to media reports, troika representatives are pushing for a total of 7,000 layoffs of public servants within the year, to reach 20,000 by the end of 2014.

According to Kathimerini, Prime Minister Antonis Samaras is reportedly keen to clinch an agreement on all outstanding issues with the troika by tomorrow, chiefly so Stournaras can travel to Friday’s Eurogroup summit in Dublin with concrete progress to report ahead of an anticipated decision on a EUR 2.8-billion tranche of rescue funding later this month.

According to sources, the premier also wants the talks concluded quickly so he can present Greeks with some good news, though hopes were slim for such a quick breakthrough.

Meanwhile, the troika of lenders to Greece “did not place any veto on the merger” of National Bank and Eurobank, and whoever talks about “the failure” of the merger should not “jump the gun”, Finance Minister Yannis Stournaras said according to AMNA.

Speaking in Parliament, Stournaras clarified that the merger did not go ahead because both banks told the Bank of Greece that they could not come up with the 10% of the needed capital.

“Therefore, they can no longer be the judges of whether the merger can continue; the new shareholder must be the one to decide when recapitalisation is completed, and that will be the Financial Stability Fund. That does not mean the merger failed,” the finance minister said. “It may go ahead or not, depending on which criteria the Fund selects, based on the public interest. Therefore, nobody vetoed it. I, for one, wish they could have found the EUR 10 billion.”