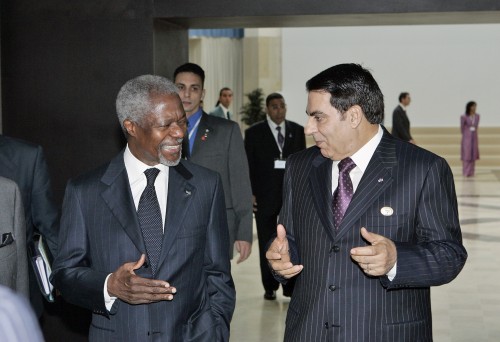 On Wednesday a Tunisian military prosecutor demanded the death penalty for ex-president Zine El Abidine Ben Ali, who is being tried in absentia as he has fled to Saudi Arabia to seek exile, an official said.

The former president is being charged for deaths, corruption and toture that occurred during the Arab Spring protests in the country last year. Ben Ali has already been sentenced to more than 66 years in prison but has not yet been convicted of charges that carry the death penalty, according to Al Arabiya.

It is the first time the death penalty has been sought against the ousted  dictator  in which the protest against his autocratic rule has triggered the awakening that has swept the region.

Among those on trial in the case are former interior ministers Rafik Belhaj Kacem and Ahmed Friaa, Reuters reported.

Tunisia’s government has faced condemnation over its failure to persuade Saudi Arabia to hand over Ben Ali and his wife, Leila Trabelsi.

According to theUnited Nations , more than 300 people were killed and many others wounded during Ben Ali’s crackdown on protests over corruption, unemployment, and high food prices.