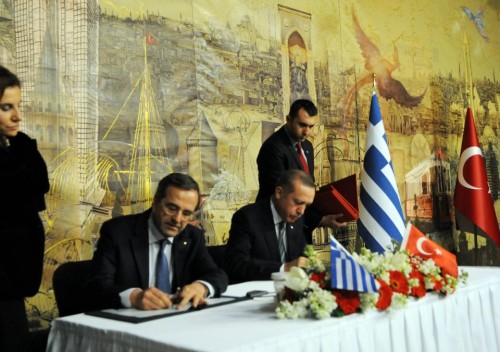 Turkey has submitted a note verbale to the United Nations in reply to one delivered by Greece recently notifying international officials of Turkey’s granting of exploration permits for areas deemed to fall within Greek continental shelf.

According to a statement by the Greek Foreign Ministry late on Tuesday concerning the note verbale sent by Turkey said that Ankara disputes the rights of some Greek islands to have a continental shelf and Exclusive Economic Zone in violation of what it says is Article 121 of the Convention on the Law of the Sea.

“It challenges the right of the Greek islands to a continental shelf and exclusive economic zone, in violation of article 121 of the Convention on the Law of the Sea, which is – in accordance with international jurisprudence and customary international law, and thus necessarily – binding for all countries in the international community,” the statement said.

“The Greek government, as in its recent efforts, will continue to safeguard all of the country’s sovereign rights deriving from international law.”

The Greek government submitted a verbale note to the United Nations on 20 February 2013 arguing that the areas Turkey had granted exploration permits in the Mediterranean were deemed to fall within the Greek continental shelf.

In an announcement issued a day later, Ankara stressed that the licenses that Turkey has given to the Turkish Petroleum Corporation (TPAO) since 2007 are within the boundaries of the Turkish continental shelf in the eastern Mediterranean.

“It will be good if things don’t go that far. Unilateral moves outside the framework of international law have shown not to help, and they should be avoided.”