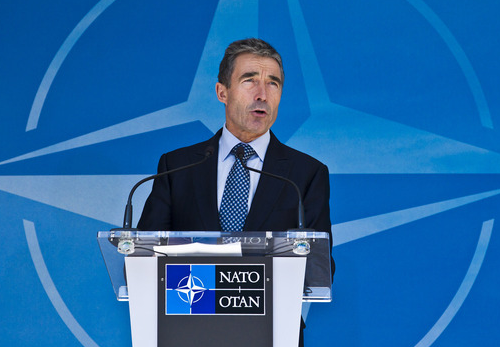 “We consider this act to be unacceptable and condemn it in the strongest terms. It is another example of the Syrian authorities’ disregard for international norms, peace and security, and human life,” Rasmussen said.

The North Atlantic Council met on Tuesday at Turkey’s request to hold consultations within the framework of Article 4 of the Washington Treaty which states that “the Parties will consult whenever, in the opinion of any of them, the territorial integrity, political independence, or security of any of the Parties is threatened.”

The North Atlantic Council discussed the shooting down of a Turkish aircraft by Syria.

“Our thoughts at this difficult time are with the missing Turkish aircrew, their families and their loved ones,” Rasmussen added in a statement.

Meanwhile, President Abdullah Gul said today the shooting down of an unarmed Turkish plane by Syria shows the level of paranoia that has gripped the country’s armed forces, according to Hurriyet daily news.

Gül spoke during the Black Sea Economic Cooperation (BSEC) summit in Istanbul, where he said Turkey would not tolerate the downing of its plane by Syria.

Syria shot down a Turkish military jet on June 22, escalating tensions between the two countries.

On the other hand, Syria insists that the Turkish aircraft violated its airspace on Friday.

But Turkey says that although the  jet had violated  Syria’s airspace, it was in international airspace when it was shot down.

He said border violations in the region were not uncommon, and claimed that Syrian helicopters violated Turkish airspace five times recently, without Turkish response, according to Al Jazeera.