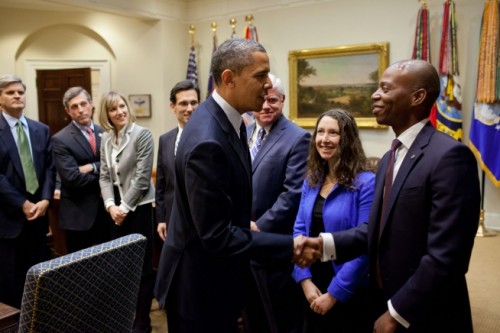 U.S. President Barack Obama Monday ordered sanctions aimed at those who “facilitate serious human rights abuses” in Syria and Iran through the use of information and communications technology.

An executive order announced by President Obama states that the two nations had committed serious human rights abuses and are “rapidly increasing their capabilities to disrupt, monitor, and track communications networks that are essential to the ability of Syrians and Iranians to communicate with each other and the outside world.”

Furthermore, the Executive Order establishes financial and travel bans for companies and individuals that have sold, leased, or otherwise provided services that helped acquire and utilize such technology to oppress their people.

Six Iranian and Syrian companies or government branches along with the head of Syria’s intelligence directorate are already subject to sanctions, Aljazeera reported.

The order also authorizes sanctions against third-country entities or individuals where they meet the criteria in the executive order.

Obama announced the sanctions in a speech at the U.S. Holocaust Museum in Washington in an effort to halt atrocities by regimes using technology, by tracking or monitoring social media and using the Internet.

While mobile and social technology has been accredited for bringing about political and regime changes in other Middle East countries, some regimes have used technology to track dissidents or block internet access.