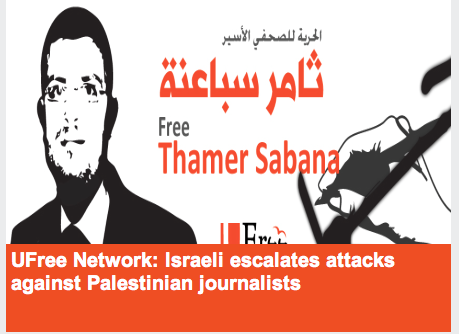 “UFree perceives the Israeli violation which includes direct targeting, killing attempts, body harming and arrests as a war crime as indicated by international law,” the rights group said in a statement.

The Network demands Israel to immediately release journalists and activists who are reporting the conflict.

In a press statement dispatched on Friday, the network denounced the Israeli arrest of Journalist and cartoonist, Themr Sabana on Wednesday, 4th March 2013.

A field report prepared by UFree revealed that an Israeli armed group seized the house of Sabana at dawn.

“The house of Sabana was stormed by the armed soldiers resulting in great damage to its contents in addition to illegally confiscating many valuables,” UFree said in the report.

“Thamer was taken then blindfolded then interrogated in front of his children before he was taken by a military vehicle. Simultaneously, a journalist named Bakri Al Otaily was arrested at the same time.”

UFree report demonstrates that the arrest of Palestinian journalists is increasing. The number of prisoner journalists is more than 9 including brother of Sabana, Mohamad Sabana who is also a cartoonist. Mohammad was arrested two weeks ago. Journalist Amir Abu Arafa has been in Israeli jails for the past 19 years. He is under administrative detention.

The network suggests that Israel is intentionally targeting journalists to suppress their coverage which expose the constant Israeli crimes.

“Journalists are being targeted while practicing their profession. The Gaza war of 2009 and 2012 is a clear example of Israeli practices where a number of journalists were killed in addition to bombarding their press compounds and vehicles. Just recently, journalist Jihad Al Qadi was shot by Israeli army while covering Israeli suppression of non-violent Palestinian protests,” UFree said.

The Network calls on International organisations to pressure Israel and hold it accountable for such crimes.

“Everyone has the right to freedom of opinion and expression; this right includes freedom to hold opinions without interference and to seek, receive and impart information and ideas through any media and regardless of frontiers.”

The network also calls on the UN Security Council to work towards resolution 1738, which condemned attacking Palestinian journalists and call for their safety.