Posted on: October 13th, 2012 by Arif Mansour No Comments 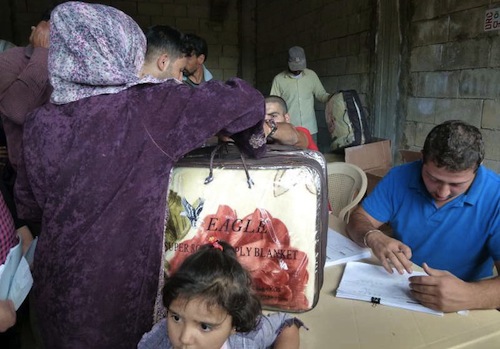 The United Nations refugee agency said it is boosting its efforts to protect tens of thousands of uprooted Syrians during the cold weather expected throughout the upcoming winter months.

“We are budgeting more than $64 million for winter preparations throughout the region, including for displaced Syrians in their own country,” the chief spokesperson for the Office of the UN High Commissioner for Refugees (UNHCR), Melissa Fleming, told reporters in Geneva.

During the news briefing, Fleming outlined the measures the agency is taking in each of the countries which, altogether, are hosting the more than 340,000 refugees that are currently registered or awaiting registration with UNHCR.

In Jordan, where average temperatures drop to two degrees Celsius between mid-November and mid-March, UNHCR will focus on refugees living in camps as well as those living in local communities. There are more than 105,000 Syrians currently registered as refugees or awaiting registration in Jordan.

Refugees living in camps will receive a winter package that includes stoves and fuel, warm clothing, thermal blankets, plastic sheeting, hot water bottles and other items. The kit is in addition to the regular provision to refugees of blankets, sleeping mats, mattresses, jerry cans, kitchen sets, buckets, solar lamps and hygiene kits. Tent modifications are also planned for better insulation, Fleming said, adding that donors are providing more than 2,500 prefabricated family shelters, some 300 of which have already been set up in the camp.

Some 50,000 ‘urban refugees,’ who have been using their own resources or depending on help from Jordanian families, will receive cash assistance with an extra amount devoted for winter preparations in November and December. In addition, UNCHR will provide emergency grants to cover urgent needs such as clothing, fuel for heating and rental payments.

“We will also issue ‘basic needs vouchers’ which can be used in designated shops across Jordan to purchase winter clothing and a variety of non-food items for use during the winter,” Fleming said.

In Lebanon, where some 94,213 Syrians are scattered across the country, UNHCR is working to ensure the growing population has accommodation that provides sufficient protection from the cold, and that they have enough fuel and warm clothing.

In addition, cash rental assistance will be available for some 3,000 families as many are paying high accommodation prices. Fleming added that host families will also receive assistance to renovate their housing.

“Lebanese communities have generously welcomed their Syrian neighbours, but this generosity must be supported to meet the growing needs as the refugee population expands and the winter months approach,” the spokeswoman said.

In Turkey, UNHCR is working closely with the Government to provide support in the camps, which are currently hosting 96,000 refugees in seven provinces. Pre-fabricated homes, winter tents, and weather-proof facilities are all measures underway.

“UNHCR is prepared to offer its support and expertise in a number of areas, including procurement, technical specifications for various types of equipment, compilation of non-food aid packages, supply and logistics,” Fleming said. “Discussions are also underway to ensure preparedness for the needs of any urban refugees who may ultimately seek shelter in the camps during the winter months.”

In Iraq, assistance will be given to some 20,000 refugees in the three camps in the country. Some 12,000 vulnerable urban refugees and host families will receive cash grants to purchase kerosene for three months, and classrooms in camps will also be replaced with heated, pre-fabricated classrooms and aid packages will be distributed to all new arriving families.

In Syria itself, the agency has a Keeping Families Warm programme that will target 500,000 Syrians to provide for the rehabilitation of communal shelters, the distribution of non-food aid, and the provision of one-time cash assistance to the vulnerable.

“We are $12 million short of being able to fund this,” Fleming said. “The money is urgently required if we are to complete all of our winterization activities on time, prior to the onset of cold weather.”

More than 20,000 people, mostly civilians, have died in Syria since the uprising against the regime of President Bashar al-Assad began last year. A further 2.5 million Syrians urgently need humanitarian aid, according to UN estimates.