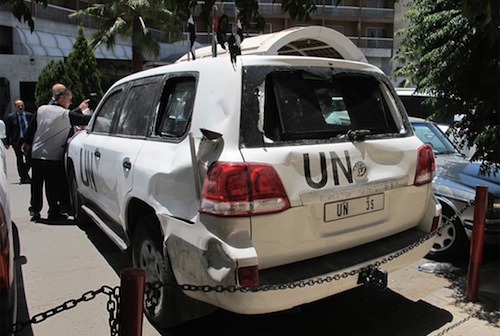 The United Nations today launched a $4.4 billion humanitarian appeal – the largest aid request in the Organization’s history – to assist the growing number of people suffering the effects of the crisis in Syria, which began two years ago with peaceful demonstrations but has since turned into a bloody conflict.

“We had hoped we would not have to do it again, but today we are asking for $4.4 billion for the whole of 2013,” Under-Secretary-General for Humanitarian Affairs Valerie Amos said in a joint press conference with other UN officials in Geneva.

“That’s more than half the combined total of all of our other appeals which cover 16 countries from Afghanistan through to Somalia,” she said.

Of the $4.4 billion, $1.4 billion will go to SHARP, assisting Syrians inside Syria, and $3 billion to RRP, which provides life-saving aid and protection to refugees in the immediate surrounding region. So far, $1.2 billion have been received.

In addition to this, the Governments of Lebanon and Jordan are seeking $450 million and $380 million, respectively, to support the efforts to provide education, health and other services to the refugees who are now in their countries.

“We estimate that 6.8 million people now need urgent help. That is one in three Syrians in need of urgent humanitarian assistance,” Ms. Amos said, adding that between January and April, the number of people displaced in Syria more than doubled. “These are massive figures, but those figures mask a human tragedy.”

Since March 2011, fighting between the Syrian Government and opposition forces seeking to oust President Bashar Al-Assad has killed more than 80,000 people. In addition, the Office of the UN High Commissioner for Refugees (UNHCR) estimates that some 1.6 million Syrians have fled their country to escape conflict, but notes that this number quickly escalating.

“We expect that we might reach 3.5 million refugees by the end of the year,” High Commissioner for Refugees António Guterres told reporters. “The funds we are appealing for are a matter of survival for suffering Syrians and they are existential for the neighbouring countries hosting refugees.”

Mr. Guterres underlined that more than half of the refugees fleeing Syria are children, and noted that many are starting to show signs of moderate to acute malnutrition.

The appeal includes $1 billion that would enable the World Food Programme (WFP) to scale up its distribution of food both inside and outside Syria. The agency currently distributes food to more than 800,000 people outside Syria and an additional 2.5 million inside the country. With additional resources, the agency said it hopes to reach a total of 7 million Syrians by late 2013.