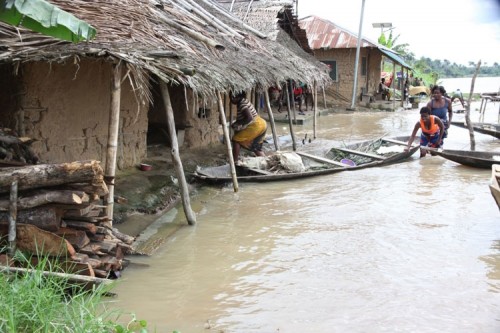 As widespread flooding in Nigeria raised the risk of disease outbreaks and food shortages among more than 7.7 million affected people, the United Nations humanitarian arm today issued an urgent appeal for $38 million to respond to the crisis.

According to the UN Office for the Coordination of Humanitarian Affairs (OCHA), more than two million people have been driven from their homes by rising waters of the Niger, the West African country’s main river.

“The response plan… targets 2.1 million people who are in need of assistance in a number of humanitarian sectors, such as water and sanitation, food shelter material, and non-food items, such as mosquito nets and kitchen sets,” an OCHA spokesperson, Jens Laerke, said of the needs, in an interview with UN Radio.

On Monday, Nigeria’s National Emergency Management Agency said that the 2.1 million had been officially registered as internally displaced persons (IDPs), while the flooding had killed 363 people in the country since July.

Though seasonal rains typically cause flooding in Nigeria, they have been heavier than usual across West Africa and adjacent regions this year, according to media reports. The resulting flash flooding and overtopped rivers have inundated vast areas.

In Nigeria, Africa’s most populous country with a population of more than 160 million, huge numbers of people also live in the country’s flood plains, many in haphazardly constructed slum-like homes that have been no match for the rising waters, the media reports add.

“The majority of those displaced are living with host communities; some are in camp-like settlements,” said Mr. Laerke. “Many are in public buildings such as schools.”

Many of the flood-affected people had been “robbed of their livelihoods,” Mr. Laerke added, since they were mainly from riverside farming and fishing communities. “They have seen either their farmlands completely inundated, (or had) their fishing equipment (and) nets washed away.”

He also warned that the destruction of farmlands and fishing areas could provoke food shortages, while OCHA noted there was a “high risk” of an outbreak of a flood-related epidemic, with people having very limited access to clean water and sanitation.

Most displaced people were getting their drinking water from ponds, streams and unprotected wells, according to a survey conducted by the UN Children’s Fund (UNICEF).