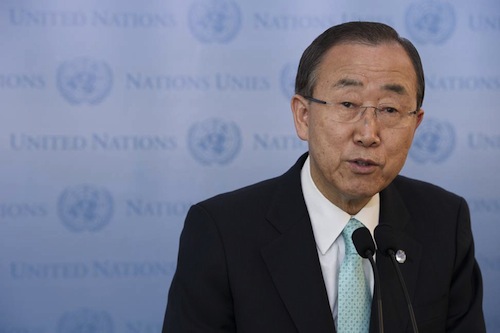 Secretary-General Ban Ki-moon deplored the rocket launch announced by the Democratic People’s Republic of Korea (DPRK), calling it a clear violation of the Security Council’s demand that Pyongyang not conduct any launch using ballistic missile technology.

The long-range Unha-3 rocket was reportedly launched from a site on DPRK’s west coast just before 10:00 a.m. local time. According to media reports, it soared over Okinawa, Japan, dropping debris into the sea off the Korean Peninsula, the East China Sea and waters near the Philippines.

The launch was “all the more regrettable because it defies the unified and strong call from the international community,” said a statement issued by Mr. Ban’s spokesperson. “It is a clear violation of Security Council resolution 1874 (2009), in which the Council demanded that the DPRK not conduct any launch using ballistic missile technology.”

That resolution imposed additional sanctions on DPRK after previous demands that the country not conduct any further nuclear or missile tests went unheeded.

“The Secretary-General has been urging the leadership in Pyongyang not to carry out such a launch and instead to build confidence with its neighbours while taking steps to improve the lives of its people,” said the statement, adding that he is concerned about the negative consequences that this “provocative” act may have on peace and stability in the region.

Mr. Ban is in close touch with the governments concerned. “He takes this opportunity to reaffirm his commitment to working for peace and stability on the Korean peninsula,” the statement added.