Posted on: October 24th, 2012 by Romana Turina No Comments 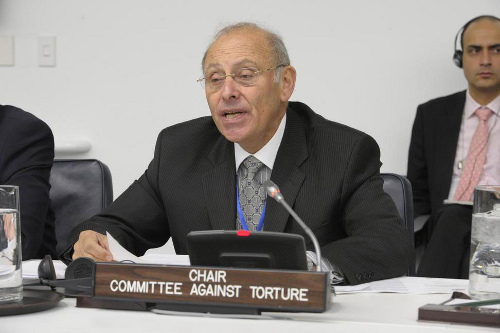 The Chairperson of the UN Committee against Torture, Claudio Grossman, told the General Assembly that while an impressive international legal framework has been developed to prevent torture there are still too many States where this practice continues.

During the presentation of the Committee’s annual report Mr. Grossman stressed that while “we have not yet achieved a world free from torture, we believe that this goal is achievable, that rights and duties need to be taken seriously, and that supervisory organs with independent experts are an essential component to achieving that goal.”

The Committee against Torture is a UN body composed of 10 independent experts tasked with preventing torture and monitoring the measures taken by States party to the Convention against Torture and Other Cruel, Inhuman or Degrading Treatment or Punishment. The Convention, which entered into force 25 years ago, provides that “no exceptional circumstances whatsoever, whether a state of war or a threat of war, internal political instability or any other public emergency, may be invoked as a justification of torture.”

It also obliges States that have ratified the Convention to refrain from deporting or returning people to countries where they would face the risk of torture.

“The Convention has made a real difference in the lives of numerous individuals,” Mr. Grossman said. “However, there is a backlog of more than 115 cases pending before the Committee. This severely weakens the system as justice cannot be provided to States and individuals within a reasonable time.”

The Convention against Torture and Other Cruel, Inhuman or Degrading Treatment or Punishment entered into force 25 years ago. To date, 153 out of the 193 UN Member States have ratified or acceded to it. However, 29 of these have never submitted a report to the Committee as required.

Mr. Grossman called on the General Assembly to increase financial support and resources so that the Committee can implement new procedures to ease the process of States reporting to the Committee on the measure they have taken to prevent torture.

The General Assembly also heard today, 24th October, from the Special Rapporteur on torture, Juan E. Méndez, who presented a report which finds that the death penalty is increasingly being viewed by international bodies as a form of torture due to the severe mental and physical pain and suffering it causes to people, in addition to failing to respect an individual’s inherent dignity as a person.

Mr. Méndez observed that the death penalty has so far been treated under the exception of the right to life provided by international law, but stressed that a new approach that puts the death penalty in the context of torture is emerging.

In his report, Mr. Méndez analyzed the evolving standards within international bodies and State practices to frame the debate about the legality of the death penalty in the context of preserving human dignity and prohibiting cruel, inhuman and degrading punishment.

He affirmed that the “death row phenomenon” is a relatively new concept within the context of torture; it refers to the pain caused by a combination of circumstances that produce severe mental trauma and physical suffering among prisoners serving death sentences. These include uncertainty and anxiety created by the threat of death, as well as the effects of prolonged solitary confinement, poor prison conditions and lack of educational or recreational activities.

“Further, while international law does not attribute different values to the right to life of different groups of persons such as juveniles, persons with mental disabilities, pregnant women, elderly persons or persons sentenced after an unfair trial, there is an established standard, supported by a vast majority of States, that executions in these cases are inherently cruel,” Mr. Méndez said.

The independent expert also joined his voice with that of two of his counterparts – the Special Rapporteurs on Iran, Ahmed Shaheed, and on extrajudicial execution, Christof Heyns – in expressing outrage over ten executions carried out by Iran, including that of Saeed Sedighi, over drug-related crimes.

Independent experts, or special rapporteurs, are appointed by the Geneva-based UN Human Rights Council to examine and report back on specific human rights themes.