UN condemns ‘in strongest terms’ attack on US consulate in Libya 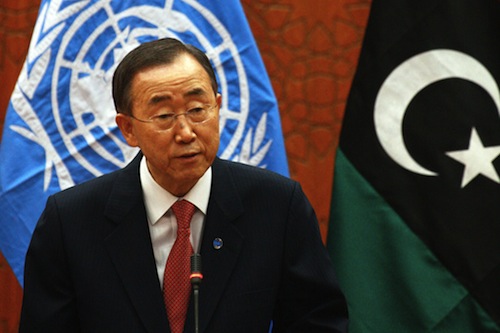 United Nations Secretary-General Ban Ki-moon and the Security Council today condemned “in the strongest terms” yesterday’s attack against the United States Consulate in Benghazi, Libya, which resulted in the deaths of four US diplomats, as well as Libyan employees of the Consulate.

“The Secretary-General condemns this attack in the strongest terms,” Ban’s spokesperson said in a statement, which noted that the UN chief is “saddened” by the attack and extends his condolences to the US Government and to the bereaved Libyan and American families.

In a press statement, the members of the Security Council echoed the Secretary-General’s reaction and expressed their deep sympathy and sincere condolences to the victims of “this heinous act” and to their families.The United Nations rejects defamation of religion in all forms. At the same time, nothing justifies the brutal violence which occurred in Benghazi yesterday.

According to initial media reports, it is believed the US ambassador to Libya, Christopher Stevens, and three other diplomats were killed, and others injured or killed, when suspected Libyan religious extremists stormed the US Consulate in the eastern Libyan town late Tuesday.

Stevens was reportedly paying a short visit to the city when the consulate came under attack, and the extremists are said to have attacked the location in protest against an anti-Islamic video produced by an American-Israeli real-estate developer.

“The United Nations rejects defamation of religion in all forms. At the same time, nothing justifies the brutal violence which occurred in Benghazi yesterday,” Ban’s spokesperson said. “The Secretary-General reminds the Libyan authorities of their obligations to protect diplomatic facilities and personnel.”

Citing the fundamental principle of the inviolability of diplomatic and consular premises, and the obligations on host Governments – including under the 1961 Vienna Convention on Diplomatic Relations and the 1963 Vienna Convention on Consular Relations – the Council members called on authorities to protect diplomatic and consular property and personnel, and to respect their international obligations in this regard.

“The members of the Security Council reaffirmed that such acts are unjustifiable regardless of their motivations, whenever and by whomsoever committed,” the Council statement read, while also mentioning that the Council members condemned “in the strongest terms” an attack on the US Embassy in Cairo, Egypt, which took place on Tuesday.

In addition, the Council members underlined the need to bring the perpetrators of these acts to justice, and, according to his spokesperson, the Secretary-General welcomes statements by Libyan authorities that they will bring those responsible for the attack to justice.

“The Secretary-General reiterates the commitment of the United Nations to continue working with the Government and the people of Libya as they strive to bring stability to their country,” Ban’s spokesperson added.