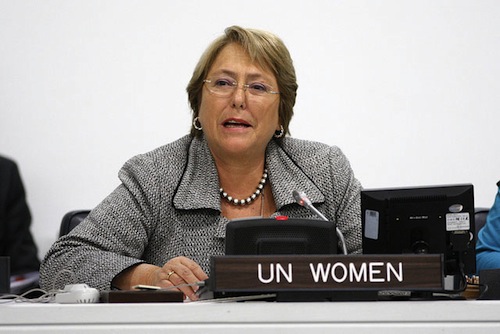 The head of the United Nations agency tasked with advancing gender equality has condemned the recent violence against women in Afghanistan and stressed the need to protect their rights.

Michelle Bachelet, Executive Director of the UN Entity for Gender Equality and the Empowerment of Women (UN Women), noted in a statement that recent weeks have witnessed cases of “extreme abuse and appalling violence against women.”

“These cases have once again focused attention on the continuing and urgent need to protect women’s and girls’ rights as the world redefines its role in Afghanistan, and as the Government of Afghanistan moves forward in [its] transition,” she stated.

Ms. Bachelet said such brutality is “intolerable” and called on the Government to respond urgently to these crimes, bring the perpetrators to justice, put an end to a culture of impunity and create a culture of zero tolerance of violence and discrimination against women and girls.

It is vital, stressed the Executive Director, that the important gains made for and with women over the past decade are advanced and sustained and that women are fully engaged in charting the future of Afghanistan.

“If Afghan women and girls continue to be ignored within the major decision-making processes affecting their country, the vision of a more secure, prosperous and stable Afghanistan cannot be realized,” she stated.

“To ensure progress for Afghanistan, we must act in solidarity to prioritize women’s rights, equality and accountability, and in ending impunity for violence against women and girls,” she added. “UN Women remains committed to working with the Government and people of Afghanistan to advance women’s empowerment and gender equality.”