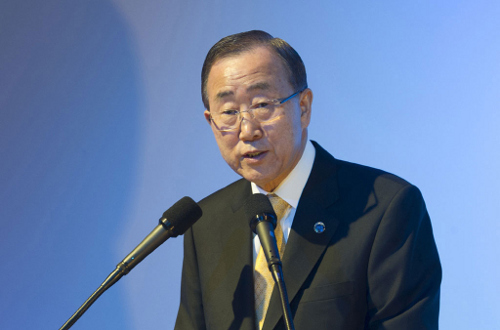 Secretary-General Ban Ki-moon has offered his heartfelt congratulations to Cardinal Jorge Mario Bergoglio, who has taken the name Pope Francis on his assumption of the papacy, and to all Catholics across the world on the occasion of the election of the new Pontiff.

“I look forward to continuing cooperation between the United Nations and the Holy See, under the wise leadership of His Holiness Pope Francis,” Mr. Ban said in a statement issued immediately after the announcement was made at the Vatican.

Francis was elected on Wednesday on the second day of the conclave in Vatican City, after receiving the required two-thirds majority, or at least 77 votes of the 115 cardinal electors from 48 countries.

The 76-year-old from Argentina who has been eleceted the 226th pope, is the first Jesuit and the first non-European pontiff in nearly 1,300 years.

Pope Francis appeared on the central balcony of St Peter’s Basilica almosts an hour after white smoke poured from a chimney on the roof of the Sistine Chapel to indicate his election.

“We share many common goals – from the promotion of peace, social justice and human rights, to the eradication of poverty and hunger – all core elements of sustainable development,” Ban added.

“We also share the conviction that we can only resolve the interconnected challenges of today’s world through dialogue. I am certain that His Holiness will continue to build on the legacy of his predecessor, Pope Benedict XVI, in the promotion of inter-faith dialogue which is at the heart of the Alliance of Civilizations initiative.”