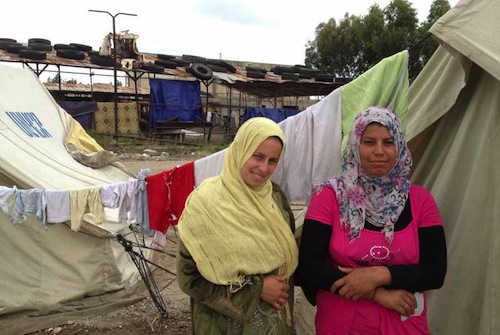 The United Nations refugee agency said it has delivered vital aid for 5,000 people displaced in the northern Syria area of Al Raqqa, where the humanitarian situation is reported to be “extremely dire” after being inaccessible for the past three months.

Also this week, UNHCR’s team in Syria started distributing financial help to displaced Syrian families in Tartus, a city on the coast, with families each receiving approximately $150.

Meanwhile, Syrians are continuing to flee to Lebanon from Qusayr which has been under siege since mid-May. Shelter is the primary concern for those headed into Lebanon, which does not have refugee camps. People live in make-shift accommodation, ranging from garages to tents.

“There is probably not a town in Lebanon that does not have Syrian refugees,” the spokesperson said.

At least 93,000 people have been killed in the conflict that began in March 2011, between the Government and forces seeking to oust President Bashar Al-Assad. In addition, the UN estimates that some 1.5 million Syrians have fled their country to escape conflict.

“Many arrivals described a city reduced to rubble, devoid of any civilians and combatants,” Fleming said. “One man UNHCR spoke to said there was no food left in the town and no water. He said people were resorting to squeezing water from the leaves of trees for nourishment.”

Fleming also reported a substantial increase in the number of wounded, including 60 children.

Some displaced from Qusayr fled towards Homs, the UN Children’s Fund (UNICEF) said, where around a 1,000 families are sheltering in schools, unfinished buildings and tents.

People were extremely traumatized by the conflict, UNICEF spokesperson Marixie Mercado told the media briefing, noting that children were reporting that it took a long time for their eyes to get accustomed to sunlight because they had spent so long sheltering underground.

Despite the violence, the UN agency was able to replace a broken generator at a water pumping station in the Qusayr serving 65 towns and villages in the vicinity.

While in Aleppo, it set up a freezer and cold rooms to store vaccines. The Ministry of Health, with support from UNICEF, and its volunteers have vaccinated more than a million Syrian children so far for measles, mumps and rubella, and some 700,000 for polio.

In addition, the UN agency was able to deliver school supplies for 70,000 students and thousands of hygiene and recreation kits. With the oncoming summer heat and damaged water and sanitation networks, disease prevention is a priority. The UN is distributing soap to some 10 million people throughout the country, along with chlorination tablets and supplies for personal and garbage disposal.

Eastern Rural Damascus remains a concern, Mercado said, with an estimated 1.2 million people in difficult to access areas. The UN humanitarian agencies in Syria urged earlier this week that they be granted immediate access to assist those people.

In particular, they are trying to reach a civilian population stranded in the area of Muadhamiya in the capital city, where an estimated 5,000 families are believed to be holed up by the ongoing hostilities.

The suffering of the Syrian people makes the political solution all the more urgent, Secretary-General Ban Ki-moon said today.

Addressing journalists in New York, he appealed to the international community to respond to the UN’s latest appeal and to support the neighbouring countries bearing the greatest burdens of refugees and upheaval.

Last week, the UN launched a $4.4 billion humanitarian appeal – the largest aid request in the Organization’s history – to assist the growing number of people suffering the effects of the crisis in Syria.

Of the $4.4 billion, $1.4 billion will go to SHARP, assisting Syrians inside Syria, and $3 billion to RRP, which provides life-saving aid and protection to refugees in the immediate surrounding region.