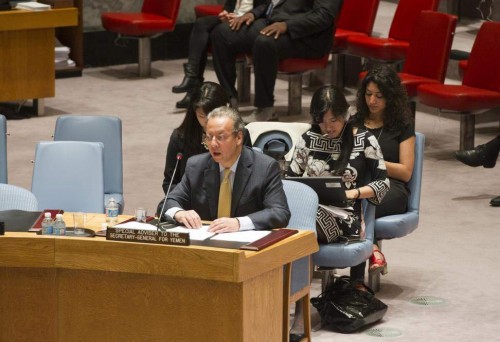 With the second round of the Yemen’s national dialogue under way, the political transition in the country is largely on course, a senior United Nations official told the Security Council today, urging continued cooperation and coordination among political parties, the Government and the donor community.

“Yemen is in the heart of its transition,” Special Adviser Jamal Benomar told the 15-member Council, presenting Secretary-General Ban Ki-moon’s latest report. “In a country awash with arms and a history of conflict, such an inclusive process of dialogue is a great achievement.”

The second round of the UN-backed National Dialogue Conference includes 565 delegates representing a cross-section of Yemeni society.

Just back from the capital, Sana’a, Mr. Benomar said “the ‘dialogue’ is extending well beyond the Conference” with men and women engaged in discussions and debates about the problems of their country and its possible future in seminars, roundtables and open tents in town squares.

“As President [Abdrabuh Mansour] Hadi has remarked, we are engaged in more than a political transition; we are witnessing a transformation of the political culture,” Mr. Benomar noted.

The ongoing conference will feed into a constitution-making process and pave the way for general elections in 2014. Preparations for the electoral process are underway, including steps to create a new biometric voter registry, with registration due to begin in September.

The UN has been providing support in Yemen’s transition in four key areas: political facilitation; technical support; capacity-building; and a public information and awareness campaign.

“We understand that there are no guarantees of what lies ahead,” Mr. Benomar told the Council. “It is an undertaking of great hope in a fragile environment, where a range of perspectives and diverse interested are seeking to realize a new and better order.”

He noted that to develop a new constitution, the National Dialogue will need to find a consensual settlement to the ‘Southern question’ linked to southern separatists.

“In the South, the streets are heating up,” Mr. Benomar said, adding that “pent-up resentment at more than two decades of unaddressed grievances and systematic marginalization.”

Since February, there was been a “significant increase” in the frequency and number of demonstrators, some resulting in injuries and deaths.

Two Commissions have been established to address the unlawful or illegitimate seizure of property and unjust dismissal from military and civil service, but without additional resources for the Commissions and further confidence-building measures by the Government or tangible improvements in people’s daily lives, “the voices of discontent will amplify, narrowing the space for dialogue,” he said.

The Special Advisor reiterated to the Council that the only peaceful route to progress is through open dialogue and, importantly, addressing the legacy of the past. He urged Yemeni authorities to establish a Commission of Inquiry into the events of 2011 and to adopt a law on transitional justice.

He also noted the steps taken by President Hadi to restructure the country’s armed forces, a move welcomed in April by Mr. Ban and the Security Council, but stressed that “much more remains to be done to ensure the professionalization” of the forces.

Highlighting other challenges to the country, Mr. Benomar noted that despite all efforts to counter it, Al Qaida remains a lethal threat in the Arabian Peninsula.

In addition, the UN official made reference to “those who wish to undermine the transition,” citing sabotage attacks on the country’s energy exports and its electricity lines, costing the country hundreds of millions of dollars.

“Those responsible for these crimes must be brought to account,” Mr. Benomar stressed.

He also cited a partisan war through “misinformation, fabrication and incitement” of the media for political means, and an increase in the assassination of mid and high level security officials and the apparent amassing of weapons among political factions.

“Arms smuggling into Yemen continues,” he said, noting that several shipments have recently been seized.

Also, the humanitarian crisis in the country “continues unabated,” with more than half of the population in need of humanitarian assistance to access food, healthcare, safe water and sanitation, and more than one million children suffering from acute malnutrition, Mr. Benomar said.

Meanwhile, the Office for the Coordination of Humanitarian Affairs (OCHA) today said that more than 90 per cent of the internally displaced people from Abyan, southern Yemen, have returned home.

“The fighting was subsiding, the overall situation looked better and there was an ongoing political process,” Mr. Laerke said.

He added that the resumption of some basic services and reopening of markets had encouraged some people to return, but shelter and agricultural livelihoods remain a concern. As some 80 per cent of the population in the south were farmers, it was critical to assist them in restarting their production.

In addition, the prospects for Yemenis in the north to return to their homes “remains distant,” Mr. Benomar said.

In May, the UN Resident and Humanitarian Coordinator in Yemen, Ismail Ould Cheikh Ahmed, had said the country was that a crossroads that could either lead to increased stability or plunge the country back into conflict.

“There will be no political transition if we don’t deal with the humanitarian situation,” Mr. Ahmed told a news conference in Geneva.