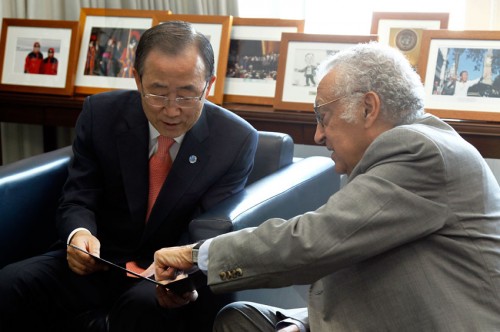 The Joint Special Representative of the United Nations and the League of Arab States on the Syrian crisis, Lakhdar Brahimi, met on Saturday with Secretary-General Ban Ki-moon in New York, to brief him on his recent trip to the Syrian capital, Damascus, and the Middle East region.

In their meeting, which took place on the margins of the recently opened 67th session of the General Assembly, Mr. Ban and Mr. Brahimi focused on how to address the appalling levels of violence in Syria and on how to progress towards an inclusive political solution that will address the legitimate demands of the Syrian people, according to a statement issued by Mr. Ban’s spokesperson.

More than 18,000 people, mostly civilians, have died since the uprising against President Bashar al-Assad began in March 2011. In addition, more than 260,000 Syrians have fled to neighbouring countries and an estimated 2.5 million are in urgent need of humanitarian assistance.

During his trip to Damascus last week, Mr. Brahimi met with Mr. al-Assad to discuss the escalating crisis. He then visited refugee camps in Turkey and Jordan, where he gained first-hand accounts of the struggles facing those who fled the conflict in their homeland.

Mr. Ban and Mr. Brahimi agreed that the crisis represents a steadily increasing threat to regional peace and security and discussed the importance of the presence of world leaders at UN Headquarters in the coming days as an opportunity to encourage increased support for addressing the violence in Syria and its impact on the neighbouring countries.

Earlier this month, Mr. Brahimi assumed the peace-facilitation role, which had been carried out since February by former UN Secretary-General, Kofi Annan, with the aim of bringing an end to all violence and human rights violations in Syria, and promoting a peaceful solution to the conflict. He is scheduled to brief the Security Council on Monday morning.