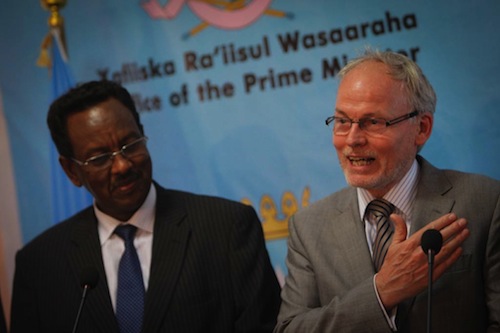 The top United Nations envoy in Somalia called for an immediate halt to armed clashes that have flared up again in the southern port city of Kismayo among groups claiming leadership over the “Jubaland” regional administration.

Reports suggest serious clashes over the last days have led to a number of casualties, including civilian deaths, according to a statement issued by the UN Assistance Mission in Somalia (UNSOM).

“At the same time as this new fighting has broken out, contacts are underway to put together an inclusive process to defuse tensions. The details are being worked out,” said Nicholas Kay, the Secretary-General’s Special Representative and head of UNSOM.

“This is not the time to engage in violence which will entrench positions and make it all the harder to achieve a settlement and begin reconciliation,” he added.

“I call on all parties to refrain from any action which could be seen as a provocation, and call for an immediate cessation of hostilities.”

Following clashes earlier this month in Kismayo, the Security Council called on all parties to refrain from any action which may threaten peace and stability in the Juba regions and to engage with the Somali Government in a constructive manner to achieve a peaceful resolution to the current crisis.

Council members also welcomed the Government’s commitment to lead reconciliation efforts in the Juba regions, and underlined the availability of the Secretary-General’s Special Representative to assist in peacefully resolving the situation.

UNSOM, which began operations at the beginning of this month, is tasked by the Council with supporting the Horn of Africa nation as it seeks to build on hard-won gains achieved last year and emerge from over two decades of strife.