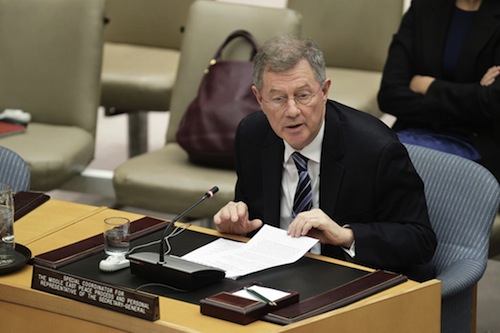 With the Israeli and Palestinian leaders having reiterated their commitment to a two-State solution, it is vital for the international community to help them bridge their differences and make a serious push for progress in the peace process, a senior United Nations envoy said yesterday.

“We now have an opening to develop a serious and substantial political initiative to achieve the negotiated two-State solution that we all hope for and that will best serve the interests, rights and aspirations of Israelis and Palestinians alike,” Robert Serry, Special Coordinator for the Middle East Peace Process, said in his briefing to the Security Council.

“The months ahead will not be easy,” he warned. “Both sides will now have to demonstrate political will and determination to make progress, and concerted action by the international community, including the region, will be needed to support their efforts.”

He noted that with people in the Middle East facing a period of “extraordinary challenges and turmoil,” establishing the groundwork necessary for a credible Israeli-Palestinian peace process remains a core priority for the UN. The visit by United States President Barack Obama to the region last week marks an important opportunity to reinvigorate efforts towards a two-State solution, he added.

Both Israeli Prime Minister Benjamin Netanyahu and Palestinian President Mahmoud Abbas reiterated their commitment to the two-State solution as essentially the only prospect for the future of Israelis and Palestinians, “while they undeniably differ on its terms, and on how to attain it,” said Serry.

“It is incumbent upon us as the United Nations, and the international community, to help them bridge those differences,” he stated. “Much work lies ahead. We should not underestimate the difficulties, but neither should we belittle the real possibility to overcome them.

“It is now time for all of us to come together in concerted action and support a serious international initiative, including through a revitalized Quartet that engages more broadly with key Arab partners, regional and other stakeholders,” he added, referring to the diplomatic grouping bringing together the UN, the European Union, Russia and the US.

Serry remarked that efforts currently underway offer the chance for a new beginning and renewed push for serious political progress. “Therein lies the opportunity – but we worry that it will not last if the volatile situation on the ground is not urgently addressed at the same time. Both parties should undertake constructive steps and work to reverse negative trends.”

In this context, he noted that there were no new settlement announcements during the past month and three structures in settlement outposts were demolished on 18 March. The period also registered fewer incursions by Israeli security forces in the West Bank, as well as a decrease in demolitions of Palestinian structures.

“It is now our hope that these initial signals of reversing the negative measures on the ground will take hold and create a conducive environment for a meaningful political process to take shape,” he stated.

Overall, the levels of violence remained high, Mr. Serry said, noting that several clashes took place during protests, including in solidarity with Palestinian prisoners; settler violence against Palestinians continued, injuring six; and Israeli security sources have reported an increase in stone throwing, including against settlers, injuring a total of 10 during the past month.

He also voiced concern about the situation of Palestinian prisoners in Israeli custody, as well as the “serious setback” caused by rocket firing from Gaza into Israel for the second time since last November’s ceasefire.