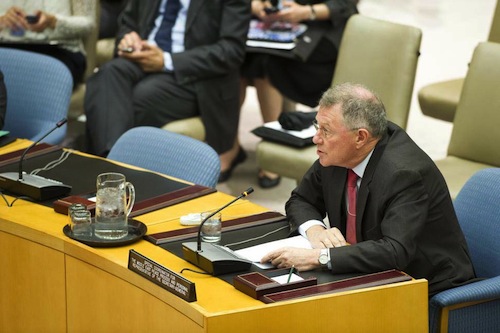 While international attention is understandably on the tragedy that continues to unfold in Syria, it is equally important to ensure the resumption of negotiations aimed at resolving the Israeli-Palestinian conflict, a senior United Nations envoy stressed to the Security Council.

“Ending the conflict in Syria is a matter of great urgency and must be the top priority of the international community,” said Robert Serry, Special Coordinator for the Middle East Peace Process. “At the same time, it would be mistaken, and dangerous, to assume that a resolution of the Palestinian-Israeli conflict is less important.

“Now is not the time to relent in our commitment to advancing the prospects for the resumption of meaningful talks towards the realization of a two-State solution. This is the time for concerted action in support of a substantive initiative lest we miss the slight opening that has been offered in recent months.”

Serry said he was encouraged by the renewed United States effort and sustained personal engagement of its Secretary of State, John Kerry. Secretary-General Ban Ki-moon has also remained in close contact with the parties and there has been renewed interest by regional stakeholders.

In separate conversations last week with Israeli Prime Minister Benjamin Netanyahu and Palestinian President Mahmoud Abbas, Ban strongly encouraged the ongoing efforts towards the resumption of peace talks, and expressed his hope that they will lead to a substantial peace initiative soon.

Amid efforts to revive the peace process, Serry stressed the importance for the parties to create the conditions conducive to a resumption of meaningful negotiations and avoid actions that would risk undermining such prospects.

“The risk to both sides is clear… it is crucial that both sides reverse negative trends on the ground and restore confidence in each other and in the possibility of a solution.”

The Special Coordinator said he was troubled by “recent tensions around the sensitive issue of Jerusalem, particularly when it came to restrictions of access to holy sites.” He echoed Ban’s call to respect religious freedom for worshippers of all faiths to have access to their holy sites, and called on religious and other leaders to refrain from inflammatory statements.

“As the efforts underway to develop a meaningful initiative to achieve the negotiated two-State solution are likely to reach a critical point in the coming weeks, we sincerely hope that the leaders on both sides will demonstrate this time their commitment and realize that this is a moment of opportunity they cannot afford to lose,” said Serry.

On Gaza, the envoy warned that the “ceasefire understanding” brokered by Egypt six months earlier had brought a marked improvement during the first three months of its implementation, but that developments over the past three months risked jeopardizing the security and humanitarian improvements made.

He called for maximum efforts to preserve the understanding and to adhere to a full calm, as well as for lifting the remaining closures on Gaza.