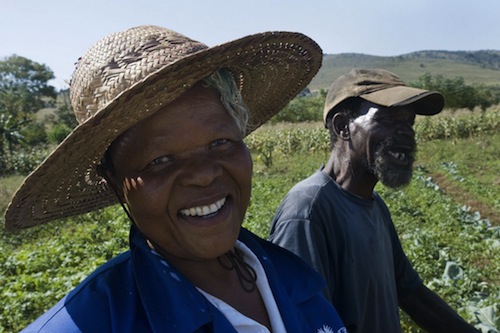 In a media statement, the UN Food and Agriculture Organization (FAO) announced that its Swaziland Agricultural Development Project, or SADP, had already begun to have an impact on the lives of the country’s smallholder farmers through a number of training initiatives and agricultural development projects designed to increase productivity and competitiveness on the global food markets.

Launched in 2009, in tandem with the Government of Swaziland and the European Union, which has provided 14 million euros in funding to the project, the SADP has also focussed on raising the nutrition levels among the landlocked nation’s rural population as well as stimulating their economic output.

A total of 340 vegetable gardens have also been established for vulnerable families to grow vegetables and herbs for household consumption, with over 2,000 people directly benefiting. Moreover, the programme has helped some 2,500 young people set up their businesses in poultry farming, pig production, or vegetable and field crop production.

Swaziland has long been dealing with various social and economic difficulties. Consecutive years of drought, a devastating AIDS pandemic, decades of economic slowdown, and the precipitous rise in global food prices and agricultural inputs have made it increasingly hard for Swaziland’s rural population, which is highly dependent on subsistence farming, to make a living.

According to the FAO’s most recent statistics on the issue, almost 20 per cent of the country’s population of one million is undernourished.

“Connecting farmers to the market is a major challenge,” Essomba said, noting that the proximity of South Africa, with its large scale agricultural producers, also posed a problem for Swaziland’s farmers. In response to this added challenge, the SADP is setting up a one million euro Marketing Investing Fund to promote niche crops that offer small farmers a comparative advantage in the market.

In addition, the initiative is also working to spread good agricultural practices crucial for farming productivity, but also with an interest in preserving the environment and lessening the pressure on Swaziland’s limited resources. According to the FAO news release, more than 2,000 farmers have already been educated in a wide range of practices including conservation agriculture and agro-forestry.