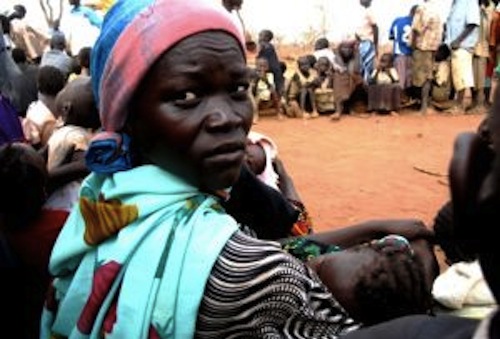 The United Nations World Food Programme (WFP) carried out the first in a series of airdrops to replenish rapidly diminishing food stocks for more than 100,000 people in South Sudan who have fled fighting in Sudan.

On Wednesday afternoon, 32 metric tons of wheat was flown to refugee settlements in Maban County in the year-old nation’s Upper Nile State, WFP’s Executive Director, Ertharin Cousin, said in a statement. The UN official has been in the country for the past two days.

There are some 170,000 Sudanese refugees currently in South Sudan, according to the Office of the UN High Commissioner for Refugees (UNHCR), with more arriving from Sudan’s South Kordofan and Blue Nile states every day after fleeing conflict and food shortages. Most of the new arrivals are dehydrated and malnourished.

Cousin, who has been meeting with refugees assisted by the WFP, said that today’s wheat shipment was flown in from Ethiopia and was enough to feed 2,100 people for a month, but the ultimate aim was to build resiliency.

“WFP’s goal is not just to meet the immediate needs of those we serve, but to work to ensure that these mothers can, in time, feed their own children,” she said “Building the resilience of the people is foremost in our minds as we work in partnership with the South Sudanese Government.”

South Kordofan and Blue Nile, which lie on the border with South Sudan, have been beset by fighting between Sudanese forces and the Sudan People’s Liberation Movement-North (SPLM-N) since last year. The SPLM-N was previously part of the rebel movement that fought for the independence of South Sudan.