Posted on: January 9th, 2013 by AlYunaniya Staff No Comments 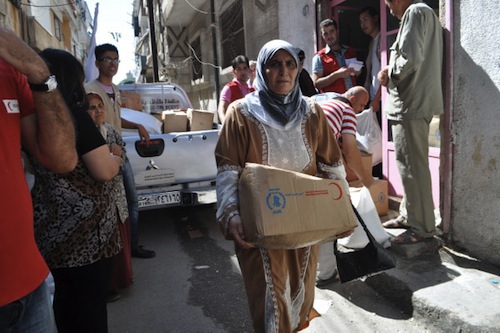 The United Nations food relief agency today warned that humanitarian needs in Syria – especially for food – are growing, with serious bread and fuel shortages across the war-torn country.

“WFP is unable to scale up assistance due to lack of implementing partners and challenges reaching the hardest hit areas,” a spokesperson for the UN World Food Programme (WFP), Elizabeth Byrs, told a news briefing in Geneva.

“Where fighting is taking place food prices have reportedly doubled and there is a lack of cooking gas,” she added.

More than 60,000 people, mostly civilians, have been killed in Syria since the uprising against President Bashar al-Assad began in early 2011. Recent months have witnessed an escalation in the conflict, which is now in its 23rd month.

The security situation’s deterioration has led WFP to temporarily relocate its staff from its sub-offices in the cities of Homs, Aleppo, Tartous and Qamisl.

According to UN estimates, the number of people in need of humanitarian assistance inside the country quadrupled between March 2012 and December 2012, from one million to four million. UN humanitarian aid planning estimates that up to a million Syrian refugees will need help during the first half of 2013, with most of these located in Jordan, Iraq, Lebanon, Turkey and Egypt.

Despite a request last October from the Syrian Arab Red Crescent (SARC) to increase the number of beneficiaries from 1.5 million to 2.5 million, WFP was unable to further scale up its assistance due to the lack of implementing partners on the ground and challenges reaching some of the country’s hardest hit areas. Its main partner – SARC – was overstretched and had no more capacity to expand further; WFP is seeking further partners on the ground to assist with its operations.

In the city of Aleppo, the majority of the population was depending on private bakeries where the price of one kilogram of bread, if available at all, had reached 250 Syrian pounds – the highest in the country – and 40 to 50 per cent higher compared to other governorates, according to WFP. Before the conflict, unsubsidized bread was priced at around 45 Syrian pounds, while subsidized bread costed 15 Syrian pounds.

There were also reports of shortages of wheat flour in most parts of the country due to the damage to mills – the majority of which were in the Aleppo area – as well as a lack of fuel for delivery, road closures and difficult access. In addition, a shortage of cooking gas was being noticed.

In her comments to journalists, Ms. Byrs also highlighted that while donors have already provided WFP with around $117 million for its activities in Syria, it needs an additional $136 million to continue feeding 1.5 million people until June this year.

With thousands more Syrians seeking safety in neighbouring countries, the UN agency is also responding to the food needs of refugees in Iraq, Jordan, Lebanon and Turkey with food distribution.

Elsewhere, the Joint Special Representative of the United Nations and the League of Arab States for Syria, Lakhdar Brahimi, has continued holding meetings in the region and elsewhere, as part of his efforts to bring about a negotiated, political solution to end the Syrian conflict. He was expected to meet with Iran’s Minister of Foreign Affairs on Tuesday evening.

Mr. Brahimi has repeatedly stated his belief in a political solution to the crisis in Syria – with the so-called ‘Geneva communiqué’ providing the basis for a peace process.

The ‘Geneva communiqué’ was issued after a meeting in the Swiss city of the Action Group for Syria, and it lays out key steps in a process to end the violence in Syria. Amongst other items, it calls for the establishment of a transitional governing body, with full executive powers and made up by members of the present Government and the opposition and other groups, as part of agreed principles and guidelines for a Syrian-led political transition.