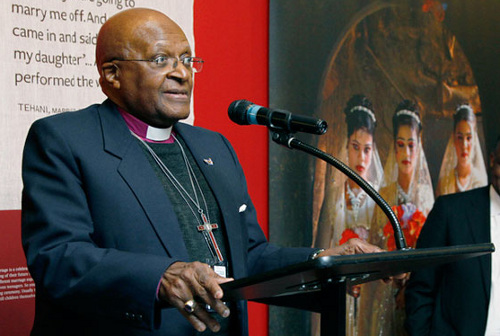 Nobel Peace Prize Laureate and activist Archbishop Emeritus Desmond Tutu will be honoured for his contribution to building a universal culture of human rights around the world, the UN Educational, Scientific and Cultural Organization (UNESCO) announced today.

Mr. Tutu was selected to receive this year’s UNESCO/Bilbao Prize, for “the outstanding role he played in building the new democratic, non-racial South Africa and his invaluable contribution as Chairperson of South Africa’s Truth and Reconciliation Commission, to national reconstruction which became a model for other post-conflict societies,” the agency said in a news release.

The Prize recognizes his activism, particularly with young people, to promote non-violence and oppose all forms of discrimination and injustice.

The jury also stressed Mr. Tutu’s contribution to the work of the UN on various human rights issues, including the promotion of a culture of human rights.

Mr. Tutu will be formally awarded the prize on 10 December, which is observed globally as Human Rights Day, by UNESCO’s Director-General, Irina Bokova, at the agency’s headquarters in Paris. The Mayor of Bilbao, Iñaki Azkuna, will also be in attendance.

During the ceremony, the 80 singers of the Choir Invisible, Desmond and Leah Tutu Choir for Peace, UK, will perform a capella compositions inspired by South African gospel and soul music to lyrics by Archbishop Tutu.

The UNESCO/Bilbao Prize is given out every two years and is funded by a donation from the Spanish city. It succeeded the UNESCO Prize for Human Rights Education that was set up 30 years ago. The Prize includes a $30,000 cheque, a diploma and a bronze trophy designed by Japanese artist Toshimi Ishii.