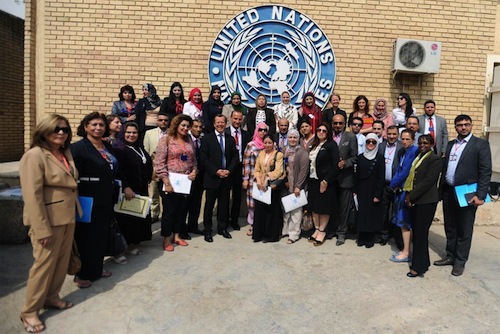 Three Iraqi women journalists have been selected as the winners of a United Nations contest which seeks to highlight the everyday challenges faced by women living in the Middle Eastern country.

The stories submitted by Suha Audah, Enas Jabbar and Shatha al-Shabibi were selected by an independent panel for their depiction of women’s situation in Iraq.

“The selection was difficult since the quality of the articles received was high; most stories portrayed brilliantly the challenges faced by women in Iraq,” said the Secretary-General’s Deputy Special Representative for Political Affairs, Gyorgy Busztin, who was a member of the jury.

The three winners received their prizes during a special ceremony organized at the UN Compound on 1 May, as part of a roundtable discussion on women and media to mark World Press Freedom Day.

Ms. Audah, a freelance journalist from Mosul, highlighted the importance of such awards for Iraqi women journalists who are facing several difficulties in their daily work. “Women should be able to impose themselves,” she said. “However, when I claim women’s rights, some people label me as sexist.”

The winning stories were anonymously selected by an independent panel composed of Mr. Busztin, the head of the Public Information Office (PIO), Eliana Nabaa, the Senior Political Advisor to UN Assistance Mission in Iraq (UNAMI) and former journalist Hussain Hindawi and the representative for the UN Entity for Gender Equality and the Empowerment of Women (UN Women, Frances Guy.