Posted on: July 7th, 2012 by AlYunaniya Staff No Comments

UN Mission to South Sudan extended for one more year 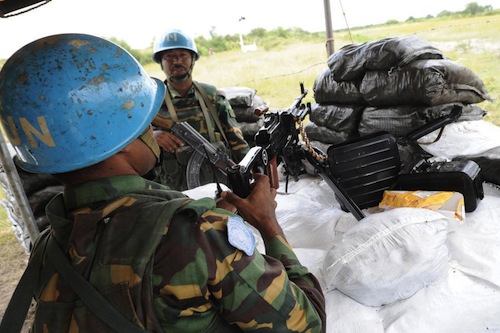 The Security Council today extended for 12 months the United Nations Mission in South Sudan (UNMISS), while focusing its mandate on civilian protection and the improvement of security in the African country.

In a unanimously adopted resolution, the Council stressed the need for UNMISS to focus on its capacity-building efforts, and called on the Government of South Sudan to take greater responsibility for the protection of its civilians, and encouraged its cooperation with the Mission.

Almost one year ago, South Sudan gained its independence, becoming the newest country in the world. Around the same time, under Chapter VII of the UN Charter, the Council adopted resolution 1996, which determined that the situation faced by South Sudan continued to constitute a threat to international peace and security in the region, and established UNMISS for an initial period of one year to consolidate peace and help establish the necessary conditions for development.

Since its inception, South Sudan has experienced border violence with its northern neighbour, Sudan, which has led to the displacement of thousands of people.

In its resolution, the Council expressed deep concern at the humanitarian situation caused by “heightened insecurity along the Sudan/South Sudan border region and the conflict in Sudan’s Southern Kordofan and Blue Nile States, as well as the inter-communal violence and widespread food insecurity,” and demanded that all parties immediately cease all hostilities and human rights abuses against the civilian population, in particular gender-based violence.

The 15-member body also called on the Government to take measures to improve women’s participation and engagement in public decision-making and in the revision of the country’s constitution to be able to “counter negative societal attitudes about women’s capacity to participate equally.”

In addition, the Council called upon UNMISS to coordinate with Government authorities its participation in regional mechanisms that seek to protect civilians and support disarmament, demobilization and reintegration, in light of attacks by the Lord’s Resistance Army (LRA) in South Sudan.

The LRA carried out the worst of its atrocities in northern Ugandan in the 1990s, but had, by 2004, largely been driven out of the area through a sustained military effort. However, remnants of the insurgent group continued to attack civilians in the four affected countries. Led by Joseph Kony, the group is notorious for carrying out massacres in villages, mutilating its victims and abducting boys for use as child soldiers, while girls are forced into sexual slavery.