UN peacekeeping mission in South Sudan extended for another year 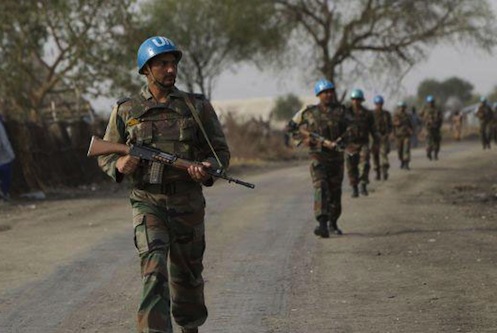 The Security Council extended the United Nations Mission in South Sudan (UNMISS) until 15 July 2014 so that it can continue to assist the world’s youngest country in consolidating peace and security and helping to establish conditions for development.

In a unanimously adopted resolution, the Council noted UNMISS’ priority task of protecting civilians, and urged the Mission to “deploy its assets accordingly.”

The Council welcomed Secretary-General Ban Ki-moon’s intention that “UNMISS will geographically reconfigure its military and asset deployment so as to focus on volatile high-risk areas and associated protection requirements.”

“A peacekeeping mission, however configured, cannot replace the Government, which is also responsible for ensuring the safety and security, and freedom of movement, of United Nations personnel and assets deployed to assist it in this regard,” he stated.

Ban reiterated his condemnation of violence against UN personnel in South Sudan and recalled the requirement for the Government to hold the perpetrators of those attacks accountable, irrespective of who the perpetrators are.

He added that, in particular, those responsible in the Sudan People’s Liberation Army for the December 2012 shooting of an UNMISS helicopter – which killed all four crew members onboard – must be brought to justice immediately.

The Council today reiterated its call on the Government of South Sudan to take greater responsibility for the protection of its civilians and in this respect encourages greater cooperation with UNMISS.

It also demanded that the Government and all relevant parties cooperate fully in the deployment, operations, and monitoring, verification, and reporting functions of UNMISS, particularly by guaranteeing the safety, security and unrestricted freedom of movement of UN personnel, as well as of associated personnel throughout the country.

Among its many other provisions, the resolution expressed deep concern at the increasing violence, particularly in the Tri-States Area of Lakes, Unity and Warrap, and in Jonglei and Western Bahr el-Ghazal states, and underlined the need to address the causes of communal violence in South Sudan.