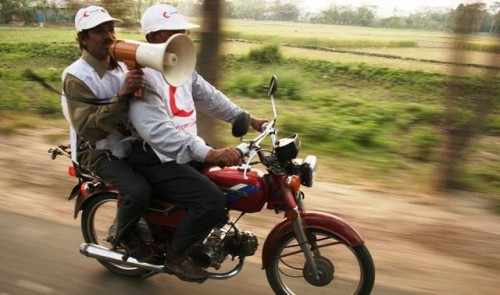 The United Nations has commended the work carried out by the Bangladeshi Government ahead of tropical storm Mahasen, which hit the country last Thursday, noting it saved thousands of lives.

“While tropical storm Mahasen reached the coastline of Bangladesh on Thursday weaker than anticipated, the preparedness work undertaken by the Government and humanitarian partners saved countless lives,” the UN Office for the Coordination of Humanitarian Affairs (OCHA) said in a news release.

An estimated one million people were evacuated from 13 coastal districts in the 24-hour period prior to the storm hitting on Thursday. Through its Cyclone Preparedness Programme, the Government activated a number of measures including mobilizing thousands of community volunteers, sending alerts and information to at-risk communities and advancing cash payments, as well as collaborating with international humanitarian partners to ensure a coordinated response was on standby.

Preliminary assessments from the Government indicate that 13 people died and some 1.2 million people were affected by the storm.

“While unfortunately there has been a loss of life, the Government demonstrated its commitment to disaster risk reduction and hase taken the necessary preparedness steps to prevent a catastrophe” said acting UN Resident Coordinator Pascal Villeneuve.

“This part of the world is regularly hit by major cyclones and so everyone took the threat extremely seriously and made sure the right measures were in place, and ensured communities in the path of the storm were safe and well informed.”

OCHA said it would continue to work with Bangladesh to restore livelihoods, shelter and provide clean water, sanitation and hygiene in affected areas.

Bangladesh has extensive experience in disaster risk reduction since adopting a series of preparedness measures following Cyclone Bhola in 1971 that killed more than 400,000 people. In 2009, when Cyclone Aila struck, many volunteers helped move thousands of people out of the disaster area, ultimately saving lives. The death toll from that tragedy was less than 200.