Posted on: June 17th, 2013 by AlYunaniya Staff No Comments 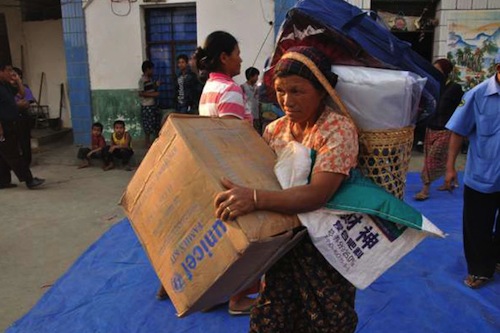 The United Nations humanitarian relief agency said it had, for the first time in a year, been able to deliver aid to thousands of displaced persons in Myanmar’s Kachin state.

A UN-led convoy is currently moving to areas beyond Government control in Kachin, the spokesperson for the UN Office for the Coordination of Humanitarian Affairs (OCHA), Jens Laerke, told reporters in Geneva.

The convoy is carrying life-saving items to some 5,100 displaced people in camps along its route between Maija Yang town and Bhamo. The items include food, special nutrients for children, household kits, hygiene kits and sanitation supplies such as water tabs.

Since June 2011, fighting between the Kachin Independence Organization and the Government of Myanmar has forced an estimated 100,000 people from their homes. An estimated 60,000 of those displaced are living in areas beyond the Government’s control. OCHA said it hopes this is the first of many convoys to those areas.

“The cross-line convoy represents a positive step forward by the Government to help all people in need across Kachin State,” said UN Humanitarian Coordinator Ashok Nigam.