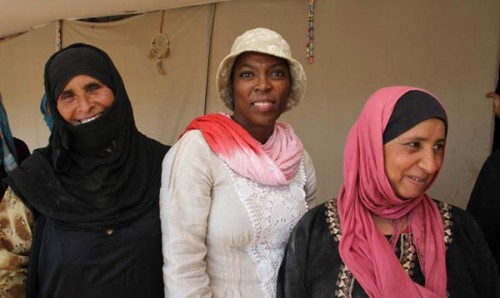 The heads of two United Nations aid agencies today raised the alarm over the worsening food insecurity in the West Bank and the Gaza Strip, where one in three Palestinian households now struggle to feed their families.

Preliminary results of a joint UN survey carried out by the Palestinian Central Bureau of Statistics, the World Food Programme (WFP), the UN Relief and Works Agency for Palestine Refugees in the Near East (UNRWA), and the Food and Agriculture Organization (FAO) found that 1.6 million people – or 34 per cent of households – were food insecure in 2012.

This represents a “dramatic” rise from 27 per cent in 2011, stated a joint news release from WFP and UNRWA.

Contributing factors include high unemployment rates, stagnant economic growth, the financial problems of the Palestinian Authority, the continued Israeli occupation of the West Bank and the six-year blockade of Gaza.

WFP Executive Director Ertharin Cousin and UNRWA Commissioner-General Filippo Grandi today visited a Bedouin village between Jerusalem and Jericho where a food distribution carried out jointly by the two agencies was taking place.

“High food prices and low wages mean that 1.6 million Palestinians don’t know from where their next meal is coming,” said Ms. Cousin. “Yet food security is security. Food security is a vital component for sustained peace across the region.”

Ms. Cousin also welcomed a new agreement with UNRWA that will strengthen cooperation in Palestine and throughout the region and address the urgent needs of the population.

In nearby Jericho, she met shoppers using electronic vouchers from WFP to buy olive oil, salt and other groceries, most of which are produced locally in Palestine. In the past three years, WFP has injected more than $100 million into the Palestinian economy through local purchase and the redemption of electronic food vouchers. This investment supports local businesses and generates employment.

During the visit to the village of Khan al Ahmar, the two officials signed a Memorandum of Understanding, in an agreement which will deepen and expand ties between their agencies.

“As well as cooperating more in the fields of food security and nutrition, we can share expertise in logistics, supply chain management and other initiatives, not just in Palestine, but regionally, particularly as we face up to the challenge of the Syria crisis,” said Mr. Grandi.