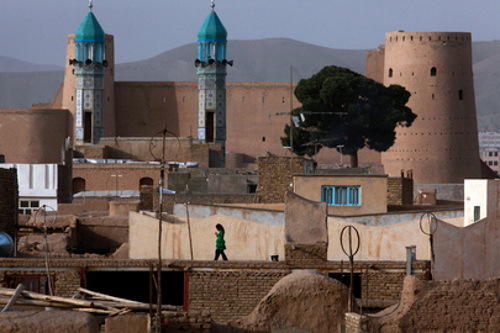 A suicide bomber has killed at least 41 people when he struck at a mosque in northern Afghanistan after Eid al-Adha prayers on Friday; dozens more were wounded as the bomb ripped through the crowd of worshippers in Maymana city in Faryab province and there are fears the death toll could rise.

The United Nations top political envoy for Afghanistan today condemned the suicide bomb attack: “This heinous attack at a mosque, killing and injuring Afghan civilians as they celebrated the Eid-al-Adha religious festival has no justification, and should be condemned by all in the strongest possible terms,” said the Secretary-General’s Special Representative for Afghanistan, Ján Kubiš.

Northern Afghanistan was relatively peaceful until now. The Taliban, who were ousted from power in a US-led invasion in 2001, used to concentrate their operations in the south and east of the country. But they have recently stepped up their activities in the north, despite the presence of more than 100,000 NATO troops in the country.

Mosques are protected places under international humanitarian law, which strictly prohibits attacks against both civilians and civilian objects, including places of worship, the United Nations Assistance Mission in Afghanistan (UNAMA) noted in a news release.

UNAMA also stated that suicide attacks that fail to distinguish between civilians and combatants are prohibited, but continue to be used by anti-government elements; representatives of the organization went on to express condolences to the families of those killed, and wishes of a speedy recovery for all those injured.

“These illegal and indiscriminate suicide attacks that kill and injure many Afghan civilians must stop,” Mr. Kubiš added. “Such attacks are completely unacceptable and those responsible are fully accountable for the deaths and injuries of civilians caused by their brutal acts.”