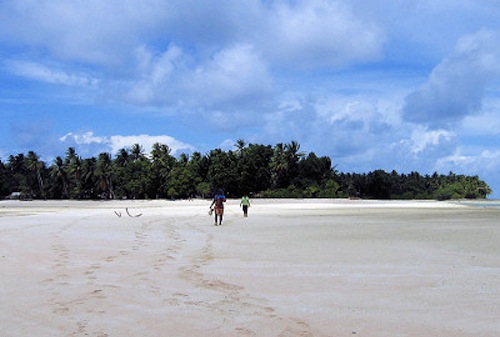 A United Nations independent expert yesterday called on the international community to not turn its back on the small island State of Tuvalu, whose communities are being seriously affected by climate change.

“Climate change is an everyday reality for people in Tuvalu, and is slowly but steadily impacting their human rights to water and sanitation,” warned the Special Rapporteur on the right to safe and drinking water, Catarina de Albuquerque, at the end of her first mission to the country. “Climate change will exacerbate water scarcity, saltwater intrusions, sea level rise and frequency of extreme weather events.”

As of 2010, 98 per cent of the population in Tuvalu had access to an improved source of water and 85 per cent had access to improved sanitation facilities, according to a joint report by the World Health Organization (WHO) and the UN Children’s Fund (UNICEF).

However, de Albuquerque noted, “these figures do not portray an accurate picture of the country’s situation and mask severe challenges currently faced by its population.” She noted that people cannot actually drink directly from the water storage tanks and have to boil it despite previous efforts to improve the situation.

“People are still suffering from a lack of water in sufficient quantities on a continuous basis. Several people told me that they have no confidence in the sustainability of the water supply,” she said.

The Special Rapporteur called on authorities to ensure that the country’s water harvesting system is used to its maximum potential in old and new buildings, and urged the Government to immediately adopt and implement a national water strategy and plan of action covering the entire population.

“Access to water and sanitation must be affordable to all, in particular to those who have a lower income. The price paid for water, sanitation and hygiene must not compromise access to other human rights such as food, housing or education,” de Albuquerque said. “I call on the Government to bear this in mind when discussing and adopting new water tariffs or when advancing the use of composting toilets.”

Tuvalu is currently developing a draft Water Act as well as a Sustainable and Integrated Water and Sanitation Policy.

During her three-day visit, the Ms. de Albuquerque met with various Government departments, and visited a settlement. She also visited a school to discuss the pupils’ access to water, sanitation and hygiene.

The Special Rapporteur will present a report on her mission to a forthcoming session of the UN Human Rights Council. After her visit to Tuvalu, de Albuquerque will travel to Kiribati, also in the Pacific Ocean, on a similar fact-finding mission from 23 to 26 July.

Independent experts, or special rapporteurs, are appointed by the Geneva-based Council to examine and report back on a country situation or a specific human rights theme. The positions are honorary and the experts are not United Nations staff, nor are they paid for their work.