Posted on: November 9th, 2012 by AlYunaniya Staff No Comments

UN saddened by loss of life after Guatemala earthquake 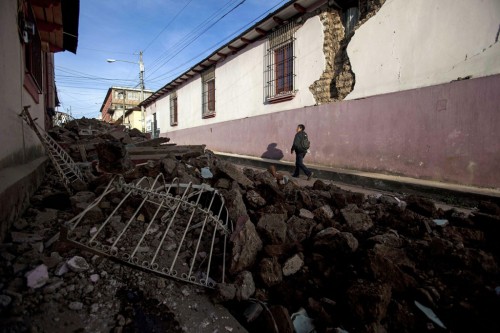 The United Nations stands ready to lend its support in response to the damage caused by an earthquake which struck Guatemala on Wednesday, a spokesperson for the world body’s Secretary-General Ban Ki-moon said today, while also noting the UN chief’s sadness over the event.

“The United Nations stands ready to lend its assistance to efforts already under way by the Guatemalan authorities to respond to humanitarian needs created by the disaster and to mobilize any international support needed for that response,” the spokesperson told a news briefing at UN Headquarters in New York.

At a 7.4 magnitude, Wednesday’s earthquake was the strongest quake to hit the country in more than 30 years, and left 52 people confirmed dead, with dozens more missing, and several thousand homeless, displaced, or without power.

The tremor hit off the country’s Pacific coast on Wednesday, leaving many villagers near the Mexican border trapped under rubble, as homes and cars were crushed.

According to media reports, at least 48 people are dead, another 150 are injured and dozens are missing, with residents seeking safety in streets due to concerns over aftershocks on Thursday.

Meanwhile, Guatemalan officials expressed little chance of finding anyone alive under the rubble.

The spokesperson added that the Secretary-General is saddened by the loss of life, and the damage to homes and infrastructure in Guatemala as a result of the earthquake.

“He extends his sincere condolences to the Guatemalan government and people, particularly the families of those who have been killed or otherwise affected in this disaster,” the spokesperson said.