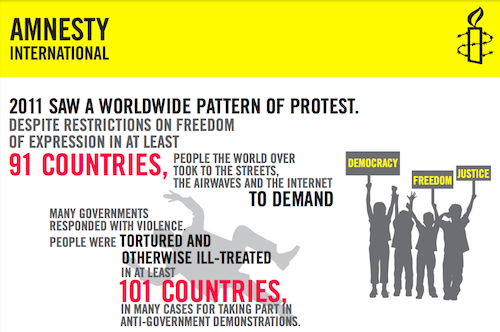 The courage shown by protesters in the past 12 months has been matched by a failure of leadership that makes the UN Security Council seem tired, out of step and increasingly unfit for purpose, Amnesty International said as it launched its 50th global human rights report with a call for a strong global Arms Trade Treaty later this year.

“Failed leadership has gone global in the last year, with politicians responding to protests with brutality or indifference. Governments must show legitimate leadership and reject injustice by protecting the powerless and restraining the powerful. It is time to put people before corporations and rights before profits,” said Salil Shetty, Amnesty International Secretary General.

The vocal and enthusiastic support for the protest movements shown by many global and regional powers in the early months of 2011, has not translated into action. As Egyptians go to the polls to vote for a new president, it looks increasingly as if the opportunities for change created by the protesters are being squandered.

“In the last year it has all too often become clear that opportunistic alliances and financial interests have trumped human rights as global powers jockey for influence in the Middle East and North Africa,” said Salil Shetty.

“The language of human rights is adopted when it serves political or corporate agendas, and shelved when inconvenient or standing in the way of profit.”

A failure to intervene in Sri Lanka and inaction over crimes against humanity in Syria – one of Russia’s main customers for arms – left the UN Security Council looking redundant as a guardian of global peace. The emerging powerhouses of India, Brazil and South Africa have too often been complicit through their silence.

“There is a clear and compelling case for the situation in Syria to be referred to the International Criminal Court for investigation of crimes against humanity. The determination of some UN Security Council members to shield Syria at any cost leaves accountability for these crimes elusive and is a betrayal of the Syrian people,” said Salil Shetty.

Amnesty International Report 2012 documents specific restrictions on free speech in at least 91 countries as well as cases of people tortured or otherwise ill-treated in at least 101 countries – in many cases for taking part in demonstrations.

“Ousting individual leaders – however tyrannical – is not enough to deliver long-term change. Governments must uphold freedom of expression at home and abroad, take international responsibilities seriously, and invest in systems and structures that ensure justice, freedom and equality before the law.”

The UN meeting to agree an Arms Trade Treaty in July will be an acid test for politicians to place rights over self-interest and profit. Without a strong treaty, the UN Security Council’s guardianship of global peace and security seems doomed to failure; its permanent members wielding an absolute veto on any resolution despite being the world’s largest arms suppliers.

“Protesters have shown that change is possible. They have thrown down a gauntlet demanding that governments stand up for justice, equality and dignity. They have shown that leaders who don’t meet these expectations will no longer be accepted. After an inauspicious start 2012 must become the year of action,” said Salil Shetty.

- Highly repressive states including China threw the full weight of their security apparatus into the suffocation of protest. There was no improvement in North Korea’s horrific human rights situation.

- In sub-Saharan Africa, the Middle East and North Africa uprisings resonated strongly with people – but excessive force was used against protesters in countries from Angola to Senegal to Uganda.

- Social protest gathered strength in the Americas, frequently bringing people into confrontation with powerful economic and political interests. Activists were threatened and killed, including in Brazil, Colombia and Mexico.

- In Russia, civic activism grew and the country saw its largest demonstrations since the collapse of the Soviet Union, but opposition voices were abused and systematically undermined.

- There was no sign of significant change in countries such as Turkmenistan and Uzbekistan. This year’s Eurovision Song Contest host, Azerbaijan, suppressed freedom of expression and 16 prisoners of conscience are still behind bars for raising their voices in 2011.

- In the Middle East and North Africa, as the uprisings occupied world attention, other deep-seated problems festered. Iran’s government was increasingly isolated, tolerated no dissent, and used the death penalty with an enthusiasm only outstripped by China, while Saudi Arabia cracked down on protesters.

- Myanmar’s government took a pivotal decision to free more than 300 political prisoners and allow Aung San Suu Kyi to contest elections. An escalation of conflict-related human rights violations in ethnic minority areas, as well as continuing harassment and detention of activists, however, suggested limits to the reform.

- Trends included abuses against Indigenous communities in the Americas as drives to exploit resources intensified; worsening discrimination in Africa over people’s sexual orientation or gender identity; increased xenophobic rhetoric from some European politicians; and increased vulnerability to terrorist acts in Africa by Islamist armed groups.

- Progress including the global trend towards abolition of the death penalty; the erosion of impunity for past abuses in the Americas; and landmark steps towards justice in Europe with the arrests of General Ratko Mladić and Croatian Serb Goran Hadžić, to face trial for crimes committed in the 1990s wars in former Yugoslavia.